Here in Drumland we have a new version of the Second Commandment. Here’s the rewrite:

Thou shalt not bow down thyself to any other cats: for I, the Lord thy Hilbert, am a jealous cat.

Here’s the backstory. Last week I got slightly concerned that Hopper was getting a bit less sociable. It was nothing big. She was still perfectly friendly, but she never jumped into our laps anymore. She’s always had too much energy to be much of a lap cat, but when we first got her she’d occasionally get tuckered out and curl up with us.

Long story short, my concern was completely misplaced. It turns out the reason she was avoiding our laps was because of Hilbert. Even if he was three rooms away, his spidey sense would tingle whenever she curled up with us, and he’d rush over to demand attention. Eventually he’d push her off completely, and apparently Hopper got tired of this. So she just stopped jumping into our laps.

But as soon as we began restraining Hilbert, it turned out that Hopper was delighted to spend a spare hour or so with her human heating pads. This was easier said than done, since Hilbert really, really gets jealous when he sees Hopper on a lap. There’s always another lap available for him, of course, but that’s not the lap he wants. He wants whatever lap Hopper is sitting in. Keeping him away is an endless struggle.

But struggle we do, and we figure that eventually Hilbert will learn there are laps aplenty and Hopper will realize that sitting in a lap isn’t an invitation to be abused by her brother. Peace and love will then break out. Someday.

In the meantime, here’s this week’s catblogging. On the left, Hopper is curled up in a sink that just fits her. Like so many cats, she’s convinced that we humans might not know how to use the bathroom properly, so she always likes to come in and supervise. On the right, Hilbert is upstairs surveying his domain. Probably checking to ensure that no one else is sitting in a lap. 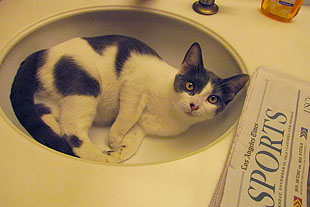 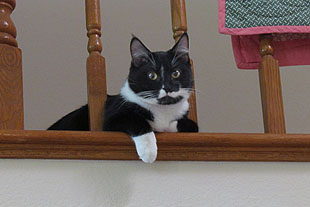