Brian Beutler writes today about the recent Republican practice of gumming up the Senate by deluging every bill with a tidal wave of awkward, superfluous, or just plain 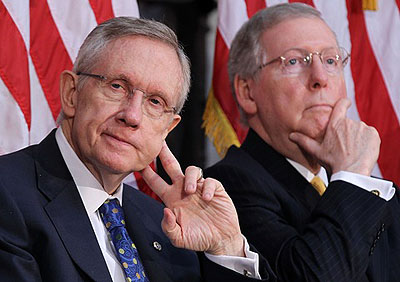 To deny Democrats even symbolic victories, Senate Republicans have flooded each legislative debate with amendments—some pertinent, some absurd—that Democrats didn’t want to vote on, or that threatened the legislative coalition behind the underlying bill. When Reid has stepped in to protect his members from these votes, McConnell has used it as a pretext to filibuster.

….With McConnell coming into control of the Senate, the dynamic will now flip….Thus his promise to open up the Senate….”The notion that protecting all of your members from votes is a good idea politically, I think, has been pretty much disproved by the recent election,” he said.

….I hope McConnell sticks to his guns on this one, because he’s completely correct about it. And if there’s a reason to think he will, it’s that it’s entirely consistent with his other, profound insights about the basic nature of legislative politics in America….McConnell wouldn’t choose a more genteel legislative strategy if it weren’t in his interest. But if he can prove that taking hard votes like this doesn’t actually make much of a difference politically, then he can prove that the amendments themselves are worthless, or at least not to be feared, and perhaps make Congress a less ridiculous place in the long run.

Ahem. Mitch McConnell is notable for many things, but a commitment to principled process improvements in the Senate is rather notably not one of them. As Beutler says, demanding the right to offer a few hundred amendments to every bill is merely a pretext for filibustering, not the real reason. McConnell does it to annoy Harry Reid, not because he has a lifelong dedication to an open Senate.

In any case, the issue is a little more complicated. How many amendments can each side offer? Who gets to offer them? What order are they voted on? Is there a time limit on debate? How do you resolve competing amendments on the same subject? The only way to make this work is to have a cast-iron set of rules governing all this stuff. Without that, it will implode the first time someone breaks whatever gentleman’s agreement McConnell strikes with Reid. And I don’t think McConnell has the power or the votes to enact a cast-iron rule on amendments.

So….I’d put this in the general category of generic blather that switches sides whenever the parties trade majorities. For the past few years, McConnell has been for filibusters and against limitations on amendments. Starting in January, some alleged Democratic perfidy will quickly give him cover to switch his position, and Harry Reid will switch his too. Life will then go on exactly as before. You heard it here first.