Last night I got around to reading George Packer’s long New Yorker profile of German chancellor Angela Merkel, and it turned out to be a surprisingly absorbing piece. Unfortunately, that’s due more to Packer’s skill as a writer than to anything he ends up revealing about Merkel. In fact, the truly astonishing thing is that he manages to write 15,000 words about Merkel without really enlightening us in any serious way about what makes her tick. Apparently she’s really that enigmatic. Here, for example, is what he says about 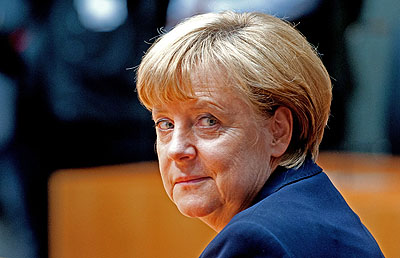 why a sober-minded East German chemist, who had never before displayed any political ambitions, suddenly decided to visit a political group that had formed after the Berlin Wall fell to ask if she could help out with anything:

Merkel’s decision to enter politics is the central mystery of an opaque life. She rarely speaks publicly about herself and has never explained her decision. It wasn’t a long-term career plan—like most Germans, she didn’t foresee the abrupt collapse of Communism and the opportunities it created. But when the moment came, and Merkel found herself single and childless in her mid-thirties—and laboring in an East German institution with no future—a woman of her ambition must have grasped that politics would be the most dynamic realm of the new Germany.

Well, OK then. Packer reports that Merkel is smart, methodical, genuinely unpretentious, and “as lively and funny in private as she is publicly soporific.” But her political views? Apparently she barely has any:

Throughout her Chancellorship, Merkel has stayed as close as possible to German public opinion….“The Chancellor’s long-term view is about two weeks,” [a Merkel adviser says]. The pejorative most often used against her is “opportunist.” When I asked Katrin Göring-Eckardt, the Green leader, whether Merkel had any principles, she paused, then said, “She has a strong value of freedom, and everything else is negotiable.”

….“People say there’s no project, there’s no idea,” the senior official told me. “It’s just a zigzag of smart moves for nine years.” But, he added, “She would say that the times are not conducive to great visions.”

….The most daunting challenge of Merkel’s time in office has been the euro-zone crisis, which threatened to bring down economies across southern Europe and jeopardized the integrity of the euro….Merkel’s decisions during the crisis reflect the calculations of a politician more mindful of her constituency than of her place in history. When Greek debt was revealed to be at critical levels, she was slow to commit German taxpayers’ money to a bailout fund, and in 2011 she blocked a French and American proposal for coördinated European action.

….Throughout the crisis, Merkel buried herself in the economic details and refused to get out in front of what German voters—who tended to regard the Greeks as spendthrift and lazy—would accept, even if delaying prolonged the ordeal and, at key moments from late 2011 through the summer of 2012, threatened the euro itself. The novelist and journalist Peter Schneider compared her to a driver in foggy weather: “You only see five metres, not one hundred metres, so it’s better you are very careful, you don’t say too much, you act from step to step. No vision at all.”

It’s kind of scary, but all wrapped up in a hazy ball of pragmatism that’s hard to get a handle on. Take the eurozone crisis, for example. Over the past five years, Germany has seemed almost spitefully hellbent on destroying the European economy simply because Germans disapprove of the spendthrift southerners responsible for the mess—all the time self-righteously refusing to admit that they themselves played a role that was every bit as lucrative and self-serving in the whole debacle. Because of this, the European economy is now headed for its third recession since 2008.

Does Merkel share this view of things? Or does she recognize what needs to be done but simply doesn’t have either the will or the courage to challenge German public opinion? That’s never clear. And yes, I guess I find that a little scary. This is why I don’t quite get the comparison Packer makes between Merkel and Obama. Initially, he says, Merkel was put off by Obama’s lofty rhetoric:

As she got to know Obama better, though, she came to appreciate more the ways in which they were alike—analytical, cautious, dry-humored, remote. Benjamin Rhodes, Obama’s deputy national-security adviser, told me that “the President thinks there’s not another leader he’s worked closer with than her.” He added, “They’re so different publicly, but they’re actually quite similar.” (Ulrich joked, “Obama is Merkel in a better suit.”)

During the Ukraine crisis, the two have consulted frequently on the timing of announcements and been careful to keep the American and the European positions close. Obama is the antithesis of the swaggering leaders whom Merkel specializes in eating for breakfast. On a trip to Washington, she met with a number of senators, including the Republicans John McCain, of Arizona, and Jeff Sessions, of Alabama. She found them more preoccupied with the need to display toughness against America’s former Cold War adversary than with events in Ukraine themselves. (McCain called Merkel’s approach “milquetoast.”) To Merkel, Ukraine was a practical problem to be solved. This mirrored Obama’s view.

Personality-wise, perhaps, Obama and Merkel are similar. “No drama” could apply equally well to either of them. But politically? I don’t see it. Obama doesn’t strike me as someone with no vision who hews as close as possible to public opinion. It’s true that he can’t always get what he wants, and obviously he faces the same constraints as any politician in a democratic system—especially one who presides over a divided government. But certainly his broad political views are clear enough, as are his political sympathies. He hasn’t been able to change the course of American politics, but not because he wouldn’t like to. He just hasn’t been able to.

So: who is Angela Merkel? After 15,000 words, I still don’t feel like I know. Is she really just someone who’s skilled at keeping her political coalition together and doesn’t much care about anything more than that? It’s a little hard to believe. And yet, that sure seems to be the main takeaway from all this.