Justin Wolfers makes a good point today. There’s a concept in economics called NAIRU, which rather awkwardly stands for the Non-Accelerating Inflation Rate of Unemployment1. Basically it means that there’s a “natural” rate of unemployment in the economy2, and if you go below it then inflation will start to accelerate. When that happens, the Fed raises interest rates to slow down growth before inflation gets out of hand.

But what’s the actual value of NAIRU? Based on past experience, most economists think it’s around 5.5 percent or so—which happens to be where we are now. And yet, inflation is still very low, and definitely not accelerating. This could be just a temporary phenomenon as we recover from a huge balance-sheet recession, or it could be something more permanent. For two reasons, my guess 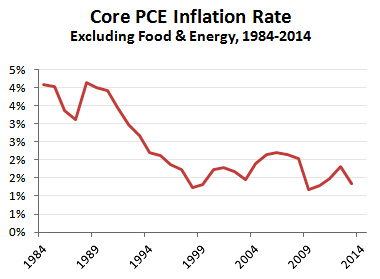 is that it’s mostly the latter. First, inflation has been steadily dropping for 30 years in the US, and there’s some reason to think that it’s the 70s that were a high-inflation anomaly, not the rest of the low-inflation 20th century. Second, there’s reason to think that the headline unemployment rate is not measuring quite the same thing as it used to. If you look at long-term unemployment, marginally attached workers, and the decline of the labor force participation ratio—which has been falling for 15 years now—it appears that a headline rate of 5.5 percent probably implies more slack in the economy than it used to. Here’s Wolfers on the natural rate of unemployment:

The problem, though, is that no one really knows what that rate is. Our uncertainty is even greater today than it normally is, because no one knows the extent to which those workers who dropped out of the labor force in response to the financial crisis will return when jobs become plentiful. By this view, today’s most important macroeconomic question is what the natural rate actually is.

The latest jobs report helps answer this question. The unemployment rate has fallen to 5.6 percent, and there are still no signs that wage inflation is rising. Indeed, with wage growth running at only 1.7 percent, the economy is telling us that we still have the ability to bring many more of the jobless back into the fold without setting off inflation.

It is only when nominal wage growth exceeds the sum of inflation (about 2 percent) and productivity growth (about 1.5 percent) that the Fed needs to be concerned that the labor market is generating cost pressures that might raise inflation. So the latest wage growth numbers suggest that we are not yet near the natural rate. And that means the Fed should be content to let the recovery continue to generate more new jobs.

1Obviously economists could have used a branding expert to help them with this. On the other hand, if they’d done that we might have ended up with Xarelxo or JobsMax™. In any case, we’re stuck with it for now.

2The idea here is that even a thriving economy has a certain amount of natural unemployment as people leave their jobs and move to new ones—because new sectors pop up, old companies go out of business, etc. That’s a good thing and a perfectly natural one in a competitive economy that’s producing lots of innovation. Trying to push unemployment lower than the natural rate is basically fruitless.