Does government regulation of an industry impede the creation rate of new startups, and thus reduce innovation and dynamism? Alex Tabarrok passes along a fascinating little nugget of research on the subject:

Could regulation be increasing barriers to entry, raising the costs of reallocation, and slowing the diffusion of productivity innovations? To test the hypothesis that regulation is reducing dynamism Nathan Goldschlag and I combined data on dynamism with an industry level measure of regulation.

Our measure of regulation is produced by an innovative technique that combs the Code of Federal Regulations (CFR) for restrictive terms or phrases such as “shall,” “must,” “may not,” “prohibited,” and “required”. The count of restrictive words in each section is then associated to industries via a machine learning algorithm that recognizes similarities between the language in that CFR section and industry language (e.g. a section of the text with words 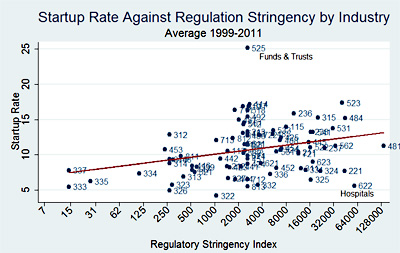 such as “pipeline” would be associated with the oil and gas industry). In this way, we can associate each industry with an index of regulation derived from the entire CFR.

Now, I have some doubts about this. For starters, it’s limited to federal regulation. State regulation is the big player in some industries. It also doesn’t really test the nature of the various regulations. A routine requirement to submit quarterly tax information gets the same weight as a heavily intrusive requirement to raise capital levels or monitor pollutant levels. Finally, that machine learning algorithm better be pretty good. Is it?

Still, despite these caveats, it’s an interesting approach. And what Tabarrok and Goldschlag found was the opposite of what they expected. As the chart above shows, industries with more regulation also had more startups. Stringent regulation doesn’t seem to impede dynamism at all. In fact, it encourages it. Further tests confirm this.

But why? I’ll toss out a few possibilities:

Any other ideas? It really is a bit of an odd result, regardless of whether you’re temperamentally in favor of regulation or not.