A couple of years ago a new narrative emerged about the role that income inequality may have played in the boom/bust cycle that ended in the Great Recession. In a nutshell, it goes like this:

This view is strongly associated with Raghuram Rajan (in his book Fault Lines) and others. But a few days ago Bas Bakker and Joshua Felman wrote a piece suggesting that there’s more to the story. The rich, they say, did more than just provide money that fueled a middle-class consumption boom and bust. The rich participated actively themselves. That is, the rise and fall of the consumption of the rich had as big an effect as that of the middle class—maybe even bigger.

The chart on the right shows the authors’ estimate of consumption patterns by income class. As you can see, from around 2003 to the present, it was fairly flat 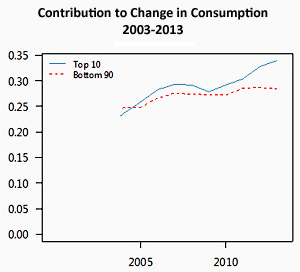 for the bottom 90 percent. But for the well off, consumption rose substantially from 2003-06, dropped conspicuously between 2006-09 and then began increasing again at a quick pace:

The model suggests something truly striking. The top decile explains the bulk of overall consumption growth. Between 2003 and 2013, about 71% of the increase in consumption came from the rich. Much of the slowdown in consumption between 2006 and 2009 was the result of a drop in consumption of the rich. The rich also played a key role in the subsequent recovery.

Our results suggest that the standard narrative of the Great Recession may need to be adjusted. Housing played a role, but so did financial assets, which actually accounted for the bulk of the loss in wealth. The middle class played a role, but so did the rich. In fact, the rich now account for such a large share of the economy, and their wealth has become so large and volatile, that wealth effects on their consumption have started to have a significant impact on the macroeconomy. Indeed, the rich may have accounted for the bulk of the swings in aggregate consumption during the boom-bust.

In some ways, this shouldn’t come as a surprise. If the bulk of income gains are going to the rich, it stands to reason that their consumption will vary substantially as those incomes go up and down. Middle-class consumption still plays a big role here, and the loss of housing wealth after 2006 still explains a great deal of why the Great Recession was so deep and so long.

But if Bakker and Felman are right, it’s far from the whole story. Consumption patterns of the rich are even more volatile than those of the middle class, and when they’re getting most of the income gains, then overall consumption patterns become more volatile too. If more income had been flowing to the middle class during the aughts, there would have been less borrowing and a more even pattern of consumption. The boom would have been more moderate and the bust would have been less catastrophic. Growing income inequality made the economy ever more fragile and ever more unstable, and we all suffered as a result.