The first reason is fairly uninteresting: the rich suffered huge losses during the Great Collapse of 2008. So even though they’ve gobbled up nearly all of the earning gains since then, they still haven’t gotten back to their 2007 income levels.

This is uninteresting because it’s only temporarily true. Given current trends, the rich will regain all their losses within another year or two, and probably surpass them. Incomes of the rich have always been volatile, but the broad trend of the past few decades is pretty clear: they invariably make up the losses they incur during recessions and then soar to new heights. This is 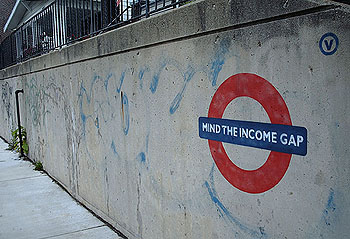 almost certain to happen again as the recovery strengthens.

Leonhardt’s second reason, however, is more interesting: government policy under Obama has increased the earnings of the poor and the middle class. Leonhardt cites a recent study from Stephen Rose of George Washington University:

The existing safety net of jobless benefits, food stamps and the like cushioned the blow of the so-called Great Recession. So did the stimulus bill that President Obama signed in 2009 and some smaller bills passed afterward. “Not only were low-income people protected — middle-income and some higher income-households had much lower losses because of these public policies,” Mr. Rose said. “For those who think government programs never work, maybe they need to think again.”

….Pretax income for the middle class and poor dropped substantially from 2007 to 2011 — about 10 percent for most groups. Yet including taxes and transfers, incomes fared better: Average income for the bottom fifth of earners rose 2.6 percent, to $24,100, and the average for the middle fifth fell only 2 percent, to $59,000. Such stagnation is hardly good news, but it’s a lot better than a large decline.

We can add Obamacare to that list too. It effectively increased the earnings of millions of low-income workers. And retaining the pre-Bush top marginal tax rates in the fiscal cliff deal of 2012 decreased the post-tax earnings of the rich slightly.

None of this is massive. The rich will make up their losses, safety net programs are already receding as the economy recovers, and middle-class wages continue to be pretty stagnant. The growth of income inequality may have taken a brief hiatus when the economy crashed, but it’s almost certain to return, bigger and badder than ever. As Leonhardt concludes:

Mr. Rose himself, who’s more optimistic about the state of the middle class than I am, says, the United States has “a real income-inequality problem.”

But the fact that inequality hasn’t continued rising in the last several years matters — first, because facts matter, and, second, because it helps show what Washington has the potential to do. For much of the last few decades, rather than attacking inequality, government policy has exacerbated it. Tax rates on the very rich, the same group receiving the largest pretax raises, have fallen the most.

They are a reminder that rising inequality is not inevitable, and that the country has the power to shape its economy.

This is true. Unfortunately, Obama’s efforts to modestly address income inequality were nearly all completed during his first year in office, when he had big Democratic majorities in Congress. Since then, almost nothing has happened, and that’s the way things are likely to stay as long as Republicans remain resolutely opposed to anything that concretely helps either the poor or the middle class.