It’s no secret that black kids are more likely to be suspended from school than white kids—three times more likely, according to a 2012 report from the Office of Civil Rights. And now a study published this week in Psychological Science may shed some light on just how much of a role racial bias on the part of educators may play.

Stanford psychology grad student Jason Okonofua and professor Jennifer Eberhardt designed a study where active K-12 teachers from across the country were presented with mocked-up disciplinary records showing a student who had misbehaved twice. Both infractions were relatively minor: one was for insubordination, the other for class disturbance. The records’ substance never changed, but some bore stereotypically black names (Darnell or Deshawn) while others had stereotypically white names (Jake or Greg). Teachers answered a series of questions about how troubled they were by the infractions reflected in the documents, how severe the appropriate discipline should be, and the likelihood that the student was “a troublemaker.”

The teachers’ responses after learning about the first infraction were about equal, regardless of the student’s perceived race. But after hearing about the second infraction, a gap in discipline emerged: On a scale of one to seven, teachers rated the appropriate severity of discipline at just over five for students perceived to be black, compared to just over four for students perceived to be white. That may not seem like a big difference, but on one-to-seven scale, a single point is a 14 percent increase—well beyond what is typically accepted as statistically significant.

A follow-up experiment of over 200 teachers took the questioning further, and found that teachers were more likely (though by smaller margins) to judge students perceived as black as engaging in a pattern of misbehavior, and were more likely to say they could “imagine themselves suspending the student at some point in the future.” 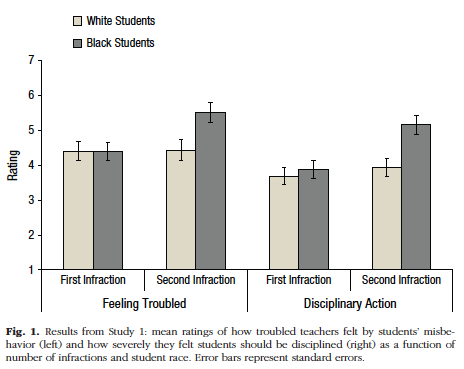 “Most school teachers likely work hard at treating their students equally and justly,” says Okonofua. “And yet even amongst these well-intentioned and hard-working people, we find cultural stereotypes about black people are bending their perceptions towards less favorable interpretations of behavior.”

Many studies have looked at the subconscious racial prejudice of snap judgments—my former colleague, Chris Mooney, wrote an excellent feature on the subject last December. But according to the authors, this is the first study to look at the psychology behind the racial gap in school discipline. And, as Okonofua said, “The research shows that even if there’s no race effect for an initial interaction, the stereotyping can play out over time. That’s really important because in the real world, there are sustained relationships.”

And the research may have implications for other kinds of sustained relationships between two levels of authority: say a boss and an employee, a prison guard and a prisoner, or a judge and a repeat offender.