So my near neighbor of Los Angeles is poised to raise the minimum wage to $15. How should we think of that?

Personally, I’m thrilled. Not because I think it’s a slam-dunk good idea, but because along with Seattle and San Francisco it will give us a great set of natural experiments to figure out what happens when you raise the minimum wage a lot. We can argue all we want; we can extrapolate from other countries; and we can create complex Greek-letter models to predict the effects—but we can’t know until someone actually does it.

So what do I think will happen? Several things:

In the tradeable sector, such as clothing piece work and agriculture, the results are very likely to be devastating. Luckily, LA doesn’t have much agriculture left, but it does have a lot of apparel manufacture. That could evaporate completely (worst case) or 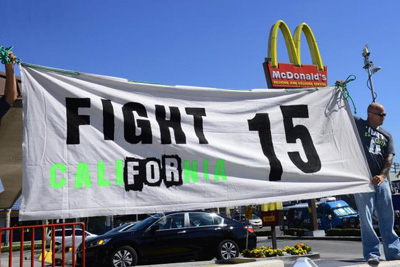 perhaps migrate just across the borders into Ventura, San Bernardino, and other nearby counties. Heavier manufacturing will likely be unaffected since most workers already make more than $15.

In the food sector, people still need to eat, and they need to eat in Los Angeles. So there will probably be little damage there from outside competition. However, the higher minimum wage will almost certainly increase the incentive for fast food places to try to automate further and cut back on jobs. How many jobs this will affect is entirely speculative at this point.

Other service industries, including everything from nail salons to education to health care will probably not be affected much. They pretty much have to stay in place in order to serve their local clientele, so they’ll just raise wages and pass the higher prices on to customers.

Likewise, retail, real estate, the arts, and professional services probably won’t be affected too much. Retail has no place to go (though they might be able to automate some jobs away) while the others mostly pay more than $15 already. The hotel industry, by contrast, could easily become less competitive for convention business and end up shedding jobs.

On the bright side, of course, a large number of low-income workers will see their wages rise. On the less bright side, the experience of Puerto Rico suggests that (a) employment losses could be as high as 9 percent, and (b) lots of low-wage workers will flee to other places.

So if I had to guess, I’d say that Los Angeles will see (a) less poverty for low-wage workers who keep their jobs, and (b) higher prices for middle-class consumers, who will end up paying for the minimum wage hike. Since the poor spend more than the middle-class, this could be a net stimulus for the LA economy. On the downside, we’re also pretty likely to see significant job losses. In other words, I agree with Adam Ozimek that we should not treat this as terra incognita just because it’s never been done before:

It’s true that the farther we go out of the historical sample, the more uncertain we are about the magnitude of the impact. But I think minimum wage advocates are taking the wrong message from this. After all, a $100 minimum wage would also be out of sample and subject to the same “we have no clue” and “can’t be on solid ground” statements from Dube and Neumark. But this uncertainty is all in the direction of more job losses. When you enter unprecedented minimum wage hike territory your uncertainty goes up, but so undeniably does your risk of job losses. The idea that a minimum wage hike being of an unprecedented magnitude creates neutral uncertainty is like someone drinking more beer than they ever have just being uncertain about what it will do to their driving ability.

So we’ll see. My own guess is that $15 is too high. I would have supported something in the $10-12 range for a city as large and basically prosperous as Los Angeles. But $15? There’s just too much uncertainty in a number that big, and the uncertainty almost all points in the direction of significant job losses.

But I could be wrong! We now have three cities that are jumping into the deep end of the minimum wage debate, and that will eventually tell us more than all the speculation in the world combined. Fasten your seat belts.