Friend of the blog Jay Jaroch recently spent some time in Cuba. Here’s the second of three posts about what he observed while he was there.

For obvious reasons, it can be difficult to get a Cuban to open up about their political views. It usually took some time to establish trust, and a certain amount of privacy. Sharing a few rum drinks didn’t seem to hurt either.

But they often did open up, especially when I offered to answer any questions they had for me. And the one question virtually everyone had was this: is Hillary Clinton going to be the next president? When I’d tell them I gave her a 75%-80% chance of winning based on demographic trends alone, they’d exhale. It wasn’t because they had any particular love for 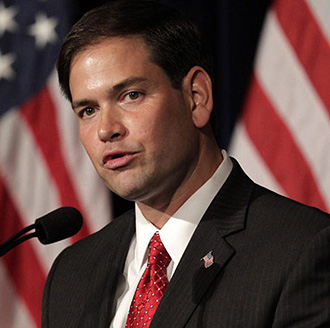 Hillary Clinton. It’s that they expected that she would continue Obama’s Cuba policies, whereas a Republican president would reinstate the full embargo. So, viva Hillary.

The more interesting thing, to me, was that they saved a particular brand of venom for Marco Rubio. Cab drivers, bartenders, artists—everyone seem to have something to say about Marco Rubio, and none of it was kind. A few suggested that as a Cuban-American Rubio should display some concern for economic struggles of every day Cubans, or to at least recognize that he was afforded an opportunity that millions of poorer Cubans never had, namely having parents who moved to the United States before Castro took over. (Or as Rubio used to tell it, barely escaping the revolution while Castro personally shot at their raft.) The fact that he was pledging to double down on the embargo was a pledge to make their lives worse, to deny them the new hope they’ve been given these last few years, all to suck up to the aging exile community in Florida.

Yes, I found something Cubans don’t like about America—it’s where Marco Rubio lives.

President Obama, on the other hand, received a fair amount of praise. According to a recent Gallup survey, Obama enjoys a 80% approval rating among Cubans. And it was pretty obvious why. “I loved Obama when he was elected,” one man in Havana told me. “Then I hated him when he turned out to be like every other president. But now, I like him again.”

Not surprisingly, when it came to their view of American politics and politicians, the embargo was a bit of a litmus test. Opinions on our Cuba policy ranged from anger to bewilderment. One man in Cienfuegos asked me, “Why do you bother? You have all the money. We are a poor island. Only 11 million people. Why do you care?” 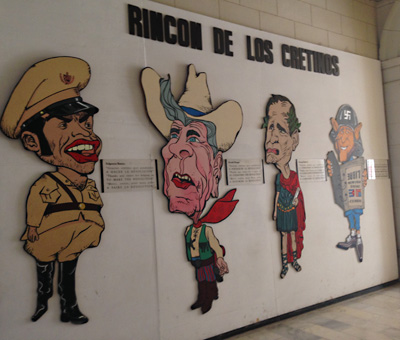 Another made a smart point. “Our government blames all our problems on you. If you don’t have the embargo, then who can they blame?”

A visit to the Museo de la Revolución in Havana drove the man’s point home. Before you even exit the lobby you come to the Rincon de los Cretinos, or “The Corner of the Pricks.” Four panels featuring cartoon versions of Fulgencio Batista, Ronald Reagan, George H.W. Bush, and George W. Bush, each with a note of thanks translated into three languages.

Next: How Cubans binge-watch American television.