Via Ed Kilgore, here’s an interesting chart from the good folks at Gallup: 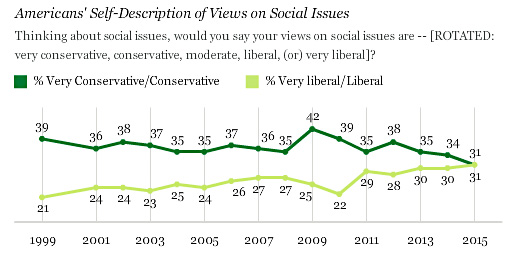 Republicans and Republican leaners, by contrast, have barely budged. In the 2015 polling there’s a slight dip in conservative ID and a slight spike in moderate ID, but it’s probably just noise. Generally speaking, the lines are pretty flat over the past couple of decades.

So why have Democrats changed so much? Perhaps it’s the impact of Millennials. Perhaps it’s the impact of gay marriage, which Democrats have been far more willing to accept than Republicans. Maybe MSNBC and liberal blogs have had a bigger impact than I would have guessed. I’m not sure. But the increase has been steady enough that it can’t be blamed on any specific event, like the Bush presidency or the financial crisis.

In any case, this really is a milestone. For a long time, one of the rocks of political analysis in America has been the simple fact that conservatives outnumber liberals. That’s been true since at least the 60s, and probably for the entire postwar period—and it’s been a perpetual millstone around Democratic necks. They couldn’t win national elections just by getting the liberal vote and a little bit of the center-right vote. They had to get a lot of the center-right vote.

But it now looks like that era is coming to an end. With social issues increasingly defining politics, a social liberal is, for all practical purposes, just a plain old liberal—and the trend of increasing liberal ID is already underway. It’s still got a ways to go, but the liberal-conservative gap is definitely closing. This probably goes a long way toward explaining why Hillary Clinton and other Democrats seem much more willing to move left than in the past. It’s because they no longer think they have to capture a huge chunk of the moderate vote to win. They still need some moderates in their camp, but they no longer need to capture two-thirds or more of them. Like Republicans, they can make do with half or even a bit less.

UPDATE: The headline initially just said “liberal” and “conservative” without mentioning that it was about social liberals and conservatives. Too much shorthand. Sorry about that. I’ve changed the headline and a few words of the text to make everything clear.