Over the past few days I’ve been trying to catch up with the fall of Ramadi and what it means for the war against ISIS. But it’s not easy figuring out what really happened.

According to Defense Secretary Ash Carter, Ramadi was yet another debacle for the Iraqi military: “What apparently happened is the Iraqi forces just showed no will to fight. They were not outnumbered; in fact, they vastly outnumbered the opposing force. That says to me, and I think 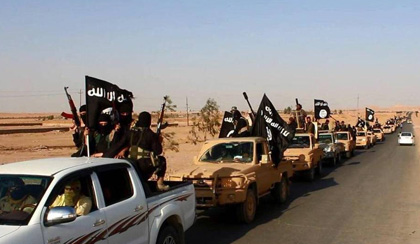 to most of us, that we have an issue with the will of the Iraqis to fight ISIL and defend themselves.”

The inevitable Kenneth Pollack, however, says that just isn’t the case:

I think it important to start by putting the fall of Ramadi in its proper perspective. Da’ish [ISIS] forces have been battling for Ramadi since December 2013, so while the denouement may have come somewhat suddenly and unexpectedly, this is not a new front in the war and it ultimately took Da’ish a very long time to take the city. Although Iraqi Security Forces (ISF) did eventually retreat from the town and abandoned at least some heavy weapons doing so, most reports indicate they fell back to defensive positions outside the town. They did not simply drop their guns and run pell-mell, as many did in June 2014.

So what does Iraqi Prime Minister Haider al-Abadi think? He’s certain that Carter was fed bad information. Iraqi troops, he says, are just fine: “They have the will to fight, but when they are faced with an onslaught by [the Islamic State] from nowhere . . . with armored trucks packed with explosives — the effect of them is like a small nuclear bomb — it gives a very, very bad effect on our forces,” he said.

Contra Pollack, then, Abadi thinks ISIS did indeed come “from nowhere.” Also, he wants us to know that his troops have the will to fight, but not when facing an enemy that uses actual weapons. Or something.

Beyond this, all the usual suspects blame the whole thing on President Obama and his usual weak-kneed reluctance to support our friends overseas. Unfortunately, that matters, regardless of whether or not it’s just reflexive partisan nonsense. When it’s loud enough and persistent enough, it starts to congeal into conventional wisdom. And if conventional wisdom says that things aren’t going well in the war against ISIS, then the pressure to do something ratchets up steadily—and not just from the usual suspects. The pressure also comes in more reasonable form from sympathetic critics. For example here, from Doyle McManus of the LA Times, and here, from Pollack himself.

Zack Beauchamp thinks this friendly criticism matters a lot. Here he is responding to Pollack’s piece:

First, Pollack is right on certain points. For example, the US campaign to equip some Sunni fighters hasn’t panned out very well….Second, critics like Pollack are going to jack up the pressure on the administration to put American troops in harm’s way. Pollack wants Obama to put American forces on the front lines to more accurately call in US airstrikes. He blames the administration’s insistence “that not a single American be killed in this fight” for why this hasn’t happened.

It’s true that the administration has strongly resisted putting American troops in combat positions. That’s because they’re trying very hard to avoid slouching toward another Iraq war, with a large and growing US combat force that very well might do more harm than good. No combat troops is a red line designed to prevent that escalation.

….The foreign policy consensus in Washington is relatively hawkish, so problems with US interventions tend to be seen as problems resulting from not using enough force or committing enough resources. The more the elite consensus shifts against Obama, the more political pressure to escalate will mount. Obama probably will resist it, but the costs of doing so are going up — as Pollack’s piece demonstrates.

So now I feel like I’ve caught up a bit on this. And it hardly matters. It’s the same old stuff. On the surface, everyone agrees that this is an Iraqi fight and Iraqis need to fight it. But of course our training of Iraqi troops is woefully inadequate—something that should come as no surprise to anyone who remembers that a decade wasn’t long enough to train Iraqi troops back when George Bush was running things. If Obama could make it happen within a few months, he really would be a miracle worker.

But if our training mission isn’t working, the alternative is wearily obvious: more American boots on the ground—which is to say, on the front lines. And again, this comes as no surprise. Anyone who was paying attention knew that Obama’s lightweight training-first strategy was likely to take years. We also knew that virtually no one in Washington has that kind of patience. Six months is the usual limit. So even among centrists and moderate hawks, pressure is going to grow to adopt a more aggressive strategy. And that means more Americans fighting on the front lines. And when that isn’t enough, even more Americans.

Can Obama resist this pressure? If anyone can, it would be him. But I’m not sure that even he can hold out for too long.