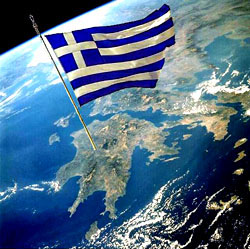 Last-ditch talks between Greece and the rest of Europe are scheduled to start today. Nobody is very optimistic:

There is little sign that either side is softening its position….In Germany especially, the fear is that providing new loans to Greece without extracting more spending cuts represents a fateful step toward a so-called transfer union, with wealthier nations providing handouts to Greece and other weaker countries. “If a small country can blackmail the other members into a transfer union without conditions and controls, the euro cannot survive,” said Adam Lerrick, a sovereign debt expert at the American Enterprise Institute, a research organization based in Washington.

….Both sides are girding for a euro exit.

The Greek central bank warned on Wednesday that the country’s economy would be devastated. And bankers say that in the last week, Greeks have pulled more than €1.5 billion from their deposit accounts. Within the European Stability Mechanism, Europe’s newly formed rescue vehicle, preparations are being made to bolster other weak countries in the event of a contagion panic.

While polls in Greece still show overwhelming support of the euro, a majority of Greeks are fed up with the harsh austerity measures that have been a condition for the €240 billion in loans that have been disbursed to the country.

I have the advantage of living in California, where this is all a fairly academic debate. It’s even interesting, in a way. Will both sides blink at the last second? If they don’t, and Greece leaves the euro and then defaults on its loans and devalues its currency, will it work? How much pain will it cause? Will Greece recover fairly quickly?

Those are interesting questions for anyone who doesn’t actually have to live with the answers. For the Greeks themselves, though, the result is going to be horrible either way. It’s just a matter of which way is slightly less horrible. For the rest of Europe, it’s possible that it will all be a big nothingburger. Then again, nobody thought the default of Creditanstalt would supercharge the Great Depression. So who knows?

What a mess. Both sides are right, and both sides are wrong. But so far Europe has done next to nothing for Greece. They’ve made lots of loans, but mainly so that Greece could pay back its debt to shaky European banks. It’s been every bit as disingenuous and self-interested as all the cheap loans those banks made to Greece in the first place so that Germans and others could enjoy access to cheap Greek products during the aughts. They enjoyed the boom from those loans and supported it with monetary policy that favored Germany but overheated Greece, and then when the economy went sour they set monetary policy continent-wide to favor Germany yet again, not the folks they’d been shoveling money to all those years. And when Greece’s economy collapsed, they just sat back, talked about following the rules, and demanded that Greece let their economy collapse even further.

It’s not as if Greece bears no blame for what happened. A lot of people share in that. But Germany has been the cynical manipulator of events all the way back to 2000, tacitly approving capital flows to Greece when it helped the German economy and then orchestrating billions in loans when German banks ended up in trouble. And now that German banks aren’t in trouble anymore, bye bye loans. Time to pull up the ladder.

Whatever else happens, it’s a good time to be German and it’s a crappy time to be Greek. Welcome to the European “union.”