Hillary Clinton gave her big economic speech today. As is my wont, I plowed through the transcript and excerpted only those parts that are actual policy proposals. This is sometimes a judgment call, but I think I got most of them. I didn’t include any vague prescriptions that she promised to explain in detail in later speeches.

By my count, Hillary’s laundry list includes 26 specific proposals, some with more detail than others. Not bad, even for a Clinton. So for those of you who aren’t interested in the blah blah blah, and just want the meat, here’s the Reader’s 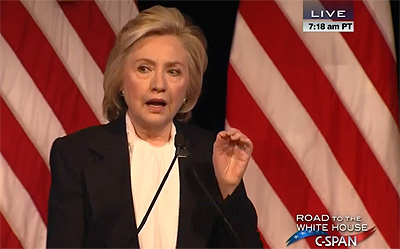 Digest version of the speech, condensed to about two minutes of reading time.

Let me begin with strong growth.

….We have to raise the minimum wage and implement President Obama’s new rules on overtime….crack down on bosses who exploit employees by misclassifying them as contractors or even steal their wages….defending and enhancing Social Security….encourage companies to share profits with their employees….reforming our tax code….Buffett Rule….closing the carried interest loophole….the decline of unions may be responsible for a third of the increase of inequality among men….we have to get serious about supporting workers.

….Every 4-year old in America [should] have access to high-quality preschool in the next ten years….80% of your brain is physically formed by age of three….intervention to help those often-stressed out young moms understand more about what they can do and avoid the difficulties that stand in the way of their being able to get their child off to the best start….reviving the New Markets Tax Credit and Empowerment Zones to create greater incentives to invest in poor and remote areas.

….The third key driver of income alongside strong growth and fair growth must be long-term growth.

….A new $1,500 apprenticeship tax credit….reform capital gains taxes to reward longer-term investments that create jobs more than just quick trades….[Make] sure stock buybacks aren’t being used only for an immediate boost in share prices….Empowering outside investors who want to build companies but discouraging “cut and run” shareholders who act more like old-school corporate raiders.

….Serious risks are emerging from institutions in the so-called “shadow banking” system….I will appoint and empower regulators who understand that Too Big To Fail is still too big a problem….ensure that no firm is too complex to manage or oversee….prosecute individuals as well as firms when they commit fraud or other criminal wrongdoing….when the government recovers money from corporations or individuals for harming the public, it should go into a separate trust fund to benefit the public.

And the obligatory paean to bipartisanship and comity:

….You know passing legislation is not the only way to drive progress. As President, I’ll use the power to convene, connect, and collaborate to build partnerships that actually get things done. Because above all, we have to break out of the poisonous partisan gridlock and focus on the long-term needs of our country.