Over at Wonkblog, we learn that American teenagers are having less sex than they used to. But why?

Crotchety adults may joke: Maybe they’re too busy messing with their iPhones.

That’s actually a decent theory, said Dr. Brooke Bokor, an Adolescent Medicine Specialist at the Children’s National Health System. More teenagers than ever have smartphones….Many are more comfortable searching in private for credible information about sexual health….They could be better educated about the risks.”

….Another possible driver of the sexual slowdown is the growing popularity of the HPV vaccine, which is now widely offered to boys and girls as young as 11. The shots, of course, come with an educational conversation. Kids 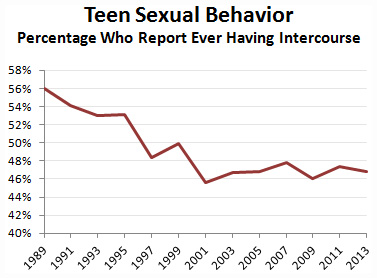 learn earlier about the prevalence of STIs and how they’re spread.

Alert readers will understand immediately not only why these aren’t decent theories, but why they’re ridiculous ones. In case you need a hint, it’s in the chart on the right.

As you can see, the percentage of teens who report ever having intercourse has been dropping since the late 80s, and dropped especially sharply during the 90s. There were no smartphones in the 90s. There was no HPV vaccine in the 90s. No matter how appealing these theories might be at first glance, neither is even remotely credible as an explanation for the decline in teen sexual activity.

So what’s the answer? How about video games? Or hip hop? Or energy drinks? I have no evidence for any of these, and clean-living adults might be scandalized at the idea that any of them could have tangible benefits, but they’re all better theories than smartphones or the HPV vaccine. At least the timing fits decently.

These provocations aside, I suppose you’re now expecting me to get serious and suggest that the decline in childhood lead exposure is responsible for the drop in teen sex. Maybe! There is, after all, some evidence that reduced lead exposure is associated with the drop in teen pregnancy over the past few decades, and it’s reasonable to suspect that less teen pregnancy might be the result of less teen sex. But there are at least two problems with this. First, pregnancy rates can go down even if sex doesn’t, simply due to more widespread use of birth control. Second, the data on teen sex comes from the CDC, and their cohort breakdown doesn’t seem to fit the lead theory. In particular, the percentage of ninth graders reporting sexual experience didn’t start dropping until 2001, and if lead is responsible you’d expect the youngest cohort to drop earlier than older cohorts. At first glance, then, I’m not sure lead explains what’s going on. But it might. I’d just need to see more and better data to be sure.

In other words: we don’t really know for sure why teen sex is down. What we do know is that on a whole range of measures—crime rates, pregnancy, drug and alcohol use, cigarette smoking, math and reading proficiency, high school completion—teenagers have become better behaved over the past couple of decades. They just aren’t as scary as they used to be. That’s a little hard to take if you’re a social conservative who’s convinced that liberal values are destroying America, but it’s true nonetheless. And good news too.