Is Hillary Clinton starting to get into serious trouble over the personal email account she maintained as Secretary of State? Hard to say. So far there’s no evidence that she did anything wrong, just a beef between State and CIA over whether some of the emails she sent and received were classified 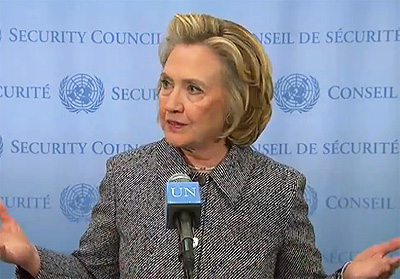 properly at the time. That may change, but for now that’s all we’ve got.

So why is this getting so much attention? As Steve Benen points out, Clinton isn’t the first Secretary of State to use a personal email account:

Politico published this report in March: “Like Hillary Clinton, former Secretary of State Colin Powell also used a personal email account during his tenure at the State Department, an aide confirmed in a statement.”….MSNBC’s Alex Seitz-Wald added at the time: “….Powell, who served from 2001-2005, apparently did not keep a record of personal emails, unlike Clinton.”

As best as I can tell, no one ever cared about the Republican secretary of state using a personal email account. It was, to borrow a phrase, a non-story.

Jeb Bush also used a personal account when he was governor of Florida. And he held onto those emails for seven years before he finally made them public. What’s more, it’s clear that, like Clinton, he decided which emails to release and which to hold back. “Gov. Bush does not have a plan to release his personal e-mails not related to state business,” an aide said in March. That sounds awfully similar to what Clinton has said about her email archive.

It may turn out at some point that Clinton did something wrong. So far, her only real sin is looking guilty—and I’ll confess I don’t understand why she’s acting that way. All it does is give Republicans ammunition and give the press corps an excuse to treat her the way they used to in the 90s. But as near as I can tell, there’s just nothing here, which is why I haven’t bothered writing about it. Aside from the obvious political motivations (for Republicans) and personal animus (among the press), is there any reason this is getting such big play? What am I missing?