With Americans shouldering $1.2 trillion in student loan debt, and about eight million of them in default, Hillary Rodham Clinton on Monday will propose major new spending by the federal government that would help undergraduates pay tuition at public colleges without needing loans.

….Under the plan, which was outlined by Clinton advisers on Sunday, about $175 billion in grants would go to states that guarantee that students would not have to take out loans to cover tuition at four-year public colleges and universities. In return for the 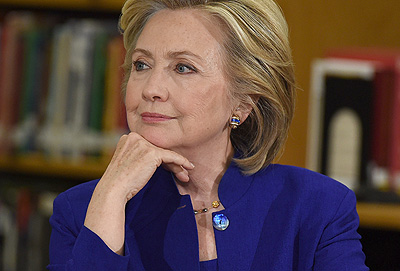 money, states would have to end budget cuts to increase spending over time on higher education, while also working to slow the growth of tuition, though the plan does not require states to cap it.

….Her plan does not go as far as some liberal advocacy groups would like, because she still expects families to make a “realistic” contribution to cover some tuition costs — through savings or loans — while students would contribute based on wages from 10 hours of work per week. In contrast Mr. O’Malley proposed “an aggressive goal — to give every student and their family the opportunity to go to college debt-free,” said Lis Smith, his deputy campaign manager.

Hillary is Hillary, so I’m sure when this is announced it will be accompanied by a detailed policy paper that makes a very good case for how it can work. My initial reaction is that it sounds kind of complicated, and I wonder if this kind of incentive can really keep states from finding ways to spend less and less on higher education. Will tuition costs go down only to be replaced by ever-increasing “fees”?

At the same time, this is pretty carefully crafted to appeal to multiple constituencies. It will appeal to middle-class voters by guaranteeing that tuition costs at state universities will be kept to a reasonable level. But it will also appeal to low-income voters with little chance of sending their kids to college. They probably wonder why taxpayers should subsidize a free education for mostly middle-income kids who are going to use that education to make more money after they graduate. Clinton has threaded this needle by insisting that families still have to contribute and students should work at least part-time.

I doubt this will become a major campaign issue. However, it will cost $350 billion over ten years, and Democrats have to be careful about how many programs like this they propose. Once you put a price tag on them, Republicans can start adding up the damages and asking where the money will come from. In this case, Clinton says it will come from effectively raising taxes on the rich, but that can only go so far. If she has very many more of these programs to announce, eventually middle-class families will have to shoulder some of the bill. That’s catnip for Republicans.