Paul Waldman writes about the asymmetric political risks that Democrats and Republicans face over the Iran nuclear deal:

If the agreement proves to be a failure — let’s say that Iran manages to conduct a nuclear weapons program in secret, then announces to the world that they have a nuclear weapon — it will indeed be front-page news, and the Democrats who supported the deal might suffer grave political consequences. 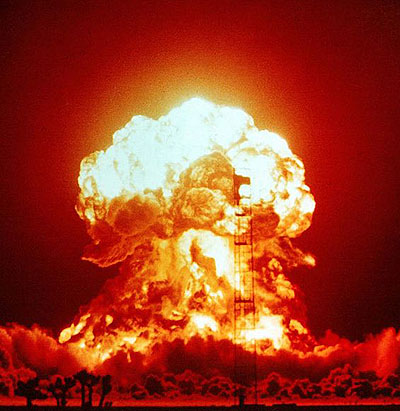 So in order to vote yes, they had to look seriously at the deal and its alternatives, and accept some long term political peril.

By contrast, there probably is less long term risk for Republicans in opposing the deal.

It’s true that if the deal does achieve its goals, it will be added to a list of things on which Republicans were spectacularly wrong, but which led them to change their opinions not a whit….Iraq War….Bill Clinton’s tax-increasing 1993 budget….George Bush’s tax cuts….But if the deal works as intended, what will be the outcome be? Iran without nuclear weapons, of course, but that is a state of being rather than an event. There will be no blaring headlines saying, “Iran Still Has No Nukes — Dems Proven Right!” Five or ten years from now, Republicans will continue to argue that the deal was dreadful, even if Iran’s nuclear ambitions have been contained.

In a way, it’s actually worse than this. Even if Iran doesn’t get nukes there will be endless opportunities to raise alarms that it’s going to happen any day now. Israeli leaders have been warning that Iran is three months away from a nuclear bomb for over two decades. There will always be new studies, new developments, and new conflicts that provide excuses for hysterical Fox News segments telling us we’re all about to die at the hands of the ayatollahs. To see this in action, just take a look at Obamacare. All the top line evidence suggests it’s working surprisingly well. Maybe better than even its own supporters thought it would. But that hasn’t stopped a torrent of alarming reports that provide countless pretexts for predicting Obamacare’s imminent doom. Premiums are going up 40 percent! Workers’ hours are being slashed! You won’t be able to see your family doctor anymore! Death panels!

So have no worries. Iran could be nuclear free in 2050 and Bill Kristol’s grandkids will still be warning everyone else’s grandkids that the ayatollahs are this close to getting a bomb. It’s kind of soothing, in a way, like a squeaky door that you’d miss if you ever oiled it.