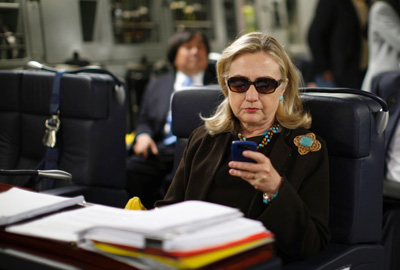 The Obama administration has discovered a chain of emails that Hillary Rodham Clinton failed to turn over when she provided what she said was the full record of work-related correspondence as secretary of state, officials said Friday, adding to the growing questions related to the Democratic presidential front-runner’s unusual usage of a private email account and server while in government.

This is the kind of thing that really could hurt Hillary Clinton. But when you scroll down to the details, it looks a lot less sinister:

….The State Department’s record of Clinton emails begins on March 18, 2009 — almost two months after she entered office. Before then, Clinton has said she used an old AT&T Blackberry email account, the contents of which she no longer can access. The Petraeus emails…start on Jan. 10, 2009, with Clinton using the older email account. But by Jan. 28 — a week after her swearing in — she switched to using the private email address on a homebrew server that she would rely on for the rest of her tenure. There are less than 10 emails back and forth in total, officials said, and the chain ends on Feb. 1.

In other words, we’re missing the very tag end of an innocuous email chain from Hillary’s Senate days that spilled over into her tenure as Secretary of State. That’s a little hard to get too exercised about.

I don’t know what the broader picture is here. Clinton has consistently said she switched to her new email address on March 18, but the Petraeus emails make it look like she might have switched by January 28. Or maybe she partially switched? Or else emails started getting forwarded to the new account as a test for a few weeks, and then got deleted on March 18 when she began using it for good? Beats me.

Either way, this seems typical of this whole affair. Substantively, it’s hard to believe anything shady is going on here. After all, it’s unlikely there’s anything to hide from her first few weeks in office, and certainly not the Petraeus emails. But optically, it certainly looks bad. It seems like another example of Clinton handling her email issue awkwardly and defensively when she doesn’t really need to.

On the bright side for Hillary, this news was released on a day when the media was preoccupied with popemania and John Boehner’s resignation. So at least she’s not getting another round of dismal front-page headlines out of it. Yet.