Here’s a nearly unbreakable law of legislating: anything named _____’s Law is a bad idea. It’s a flashing neon sign that says the proposed law is an emotional response to a single incident and will probably do more harm than good. With that in mind, the only good news in the Matt Ford story below is that this is the first I’ve heard of it:

In July, a group of legislators introduced the Establishing Mandatory Minimums for Illegal Reentry Act of 2015, popularly known as Kate’s Law. On Wednesday, the U.S. Sentencing Commission estimated that Kate’s Law would expand the federal prison population by over 57,000 prisoners, according to Families Against Mandatory Minimums, a nonprofit organization that supporters sentencing reform.

Kate’s Law is named after Kate Steinle, who died on July 1 after being shot on Pier 14 in San Francisco. Police arrested Juan Francisco Lopez-Sanchez, a Mexican national and convicted felon who was in the United States illegally, and charged him with Steinle’s murder. 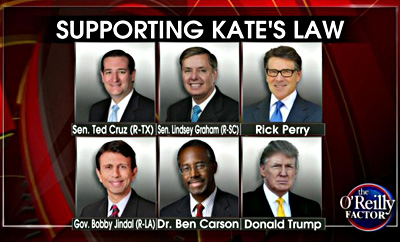 Lopez-Sanchez subsequently admitted to firing the gun, but claimed Steinle was not the target and that her death was accidental.

The Trump-esque idea behind this bill is to increase the mandatory minimum sentence for anyone who has been previously deported and then comes back. Currently the penalty is a fine or a maximum of two years imprisonment (or both). Under Kate’s Law, it would be a minimum of five years in prison. If the original deportation was due to committing a crime, the mandatory minimum is even higher. So what will this accomplish?

Despite the public rancor, immigrants are generally less likely to commit crimes than the native population, according to the The Wall Street Journal. Mandatory minimums are generally ineffective at reducing crime or recidivism. Anti-illegal-immigration advocates who complain about the burden on the American taxpayer might find a 28 percent increase in the federal prison budget counterproductive. But these are relatively minor points in the debate. What matters is the all-too-familiar refrain: Something must be done.

Over the past few years, the public has finally figured out that violent crime is way down, and this has opened the door for legislators to start thinking about criminal justice reform. Maybe we don’t need to fill our prisons to bursting with long sentences for every crime in the book. It’s an idea whose support is broad and bipartisan, but probably very shallow. As Kate’s Law suggests, all it takes is one high-profile incident and suddenly it’s time to get back on the mass incarceration bandwagon.

But like I said, this is the first I’ve heard of it. That might mean only that Fox News hasn’t really revved up yet, or it might mean that it’s such an obvious campaign gimmick (it’s the brainchild of Ted Cruz, naturally) that it doesn’t have much support in Congress. We can always hope.