Matt Yglesias asks why the press seems far more interested in Hillary Clinton’s email—a subject of very limited consequence—than in Jeb Bush’s absurd tax plan—a subject of potentially huge consequence. He compares it to their similar lack of interest in the details of George Bush’s tax plan during the 2000 campaign:

The problem was political reporters had found those details much less interesting than snarking about Al Gore’s wooden speaking style and complaining that his “demeanor” was disrespectful during a debate exchange in which Bush repeatedly attacked Gore with bogus math.

According to the conventions prevailing at the time, to offer a view on the merits of a policy controversy would violate the dictates of objective journalism. Harping on the fact that Bush was lying about the 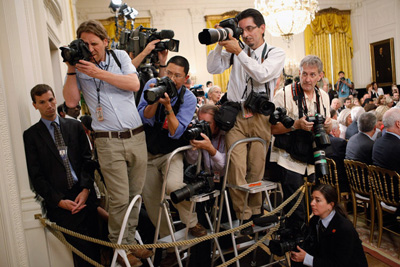 consequences of his tax plan was shrill and partisan. Commenting on style cues was okay, though, so the press could lean into various critiques of Gore’s outfit.

Fair enough. But in fairness to reporters, there’s another difference: one thing generates news every few days, the other doesn’t. Trivial or not, Hillary’s email problems produce something fresh and reportable periodically. She apologizes. The FBI announces something. We learn that maybe her personal emails can be recovered. Etc.

Conversely, Jeb Bush’s tax plan doesn’t. Oh, it can generate plenty of analysis and plenty of reports, but that’s not news. It’s just opinion about what Bush’s tax plan will accomplish. You can’t keep writing the same story over and over based on nothing more than yet another liberal saying that big tax cuts are stupid and won’t do anything to help the economy.

I don’t know what the answer is to this. Policy reporting is just a tough nut to crack. It’s inherently fairly boring. It requires both time and real expertise to dive into it properly. It produces lousy visuals. And it doesn’t change, so after you’ve reported it once, there are very few hooks to justify reporting it again. If we want the press to write more about policy, we have to figure out how to change those things. Needless to say, I have no idea how we might go about that. I don’t think anyone else does either.

That said, click the link anyway for Yglesias’ rundown of what it would take for a liberal wish list to match Jeb’s $3.4 trillion tax cut. He’s right that it’s so ridiculous sounding that it would prompt little except mockery even among the press. But propose the same thing in tax cuts that are heavily tilted toward the rich? Then it’s just another day at the office.