Dave Bry thinks it’s great that more restaurants are doing away with tipping. However, he has a list of eleven more things he also wants them to do away with. Here’s one:

The phrase “ancient grains.” Similarly, some words just don’t go so well with food. Like “decrepit” or “withered” or “wizened”, “ancient” is one of those words. Surely there’s a different descriptive we could choose. “Are the ancient grains fresh?”

That reminds me: what is this whole “ancient grains” thing all about? The BBC informs me, as usual, that I am almost comically uninformed about trending pop culture nonsense. I just heard about this recently, but Google brings up a BBC story 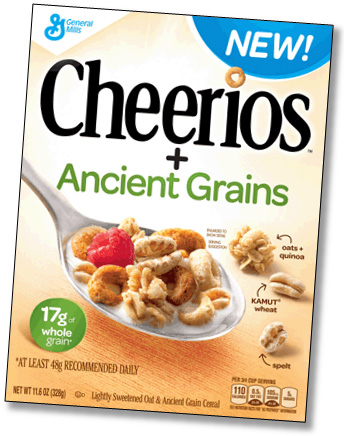 from 2014 that asks “Why do Americans love ancient grains?” In the story itself, there’s this: “In the past five years there has been an explosion in popularity of so-called ‘ancient grains’ in the American food market.” So that means this all started around 2009 and I have just heard about it now, six years later. That’s pathetic.

There is no comprehensive list of “ancient” grains, but the category is generally agreed to include amaranth, barley, bulgur, buckwheat, kamut, millet, spelt, teff and quinoa….According to figures released by the US Whole Grains Council, sales of kamut rose 686% in the year from July 2013, while sales of spelt rose by 363% and amaranth by 123% — all, admittedly, from a low base.

….[General Mills] has announced it will be launching a new line of its successful breakfast cereal, Cheerios, with ancient grains next year….”Consumers may feel that the barrier to eating ancient grains is that they’re not convenient, so we figured a way to deliver them in a bowl of cereal.”

But this will also mean including five times as much sugar as in the original Cheerios recipe — 5g of sugar per 28g serving, instead of just 1g….”We feel great about the health profile of this Cheerios,” he says.

Sounds great indeed! In any case, there’s a whole bunch of high-profile articles about this from last year, most of them apparently tied to a fall PR blitz surrounding the announcement of Cheerios+Ancient Grains—which is exactly where I first heard of ancient grains a few days ago at my local grocery store. But are ancient grains really healthier than modern grains? Here’s the Whole Grains Council:

Popcorn! Hot damn. I’m having that for breakfast instead of Cheerios. Thanks, Whole Grains Council!