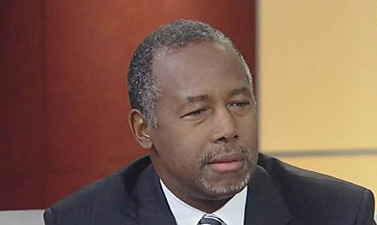 Steve Benen points me to Jake Tapper, who interviewed Ben Carson recently about his opposition to “wealth redistribution”:

TAPPER: I want to ask you about comments you made year to Politico about education funding, in which you said—quote—“Wouldn’t it make more sense to put the money in a pot and redistribute it throughout the country so that public schools are equal, whether you’re in a poor area or a wealthy area?”

…CARSON: I think that’s very different than a situation where someone is working hard, is making, you know, a lot of money, is providing a lot of jobs and is contributing to the fabric of America and then us going along and saying, well, he’s got too much. And this guy over here, he has too little, so let’s just take this one and give it to that one. That’s much more arbitrary.

TAPPER: Well, you’re talking about doing it on an individual level. But when it’s school districts, if it’s funded from local taxes, so isn’t it the same principle at stake?

CARSON: No, it’s not the same principle at stake because we are talking about the entire nation and we’re talking about what makes us competitive in the world, and the great divide between the haves and the have-nots is education. That’s very different than redistributing funding because you feel that that’s the social thing to do.

After a while you start to run out of things to say about this. We’ve already been through this dance once before, posting all the idiotic things Donald Trump said and then shaking our virtual heads over them. That finally got boring, so now it’s Ben Carson’s turn. But it’s weirdly different. Trump used bluster to hide his ignorance, but at least that suggests he knew he was ignorant. Carson doesn’t even seem to know. He tosses out his flaky ideas and then earnestly defends them. In this interview, he didn’t take the easy route of saying he’d misspoken, or was taken out of context, or has since changed his mind. He just went ahead and defended himself. Massive redistribution in education funding isn’t real redistribution that’s done because “you feel that’s the social thing to do.”

In other words, it’s okay if your motives are pure. I guess. Anyway, one of Carson’s minders quickly covered for his boss, saying “Dr. Carson [does not] support the national pooling of property tax receipts. That is a falsehood.” So I guess we’re redefining “falsehood” too. Now it means something Carson actually said that turns out to be sort of inconvenient.

I can only assume Carson is a smart man. How can a smart man who’s running for president know less about policy than the average Joe in a construction yard? It is a mystery.