On the other hand, the repeal of Glass-Steagall did allow banks to get bigger, and that increased size was a problem. When small banks go bust, we just clean up the mess and get on with things. 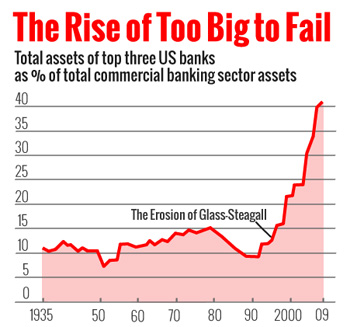 So rather than turning back the clock and reinstating Glass-Steagall, a better idea is to address bank size directly. The Fed approved one approach to this a couple of months ago by requiring the very biggest banks to hold larger capital reserves than smaller banks:

As well as making the big banks safer, the rules may also persuade them to get smaller. Capital is an economically expensive funding source for a bank. As regulators demand that large banks have more capital, their overall expenses rise. In turn, the banks may decide to pare down their less profitable businesses and shrink over time. Previous regulatory initiatives that increased capital already seem to have had that effect, and the Fed may want to see that continue.

Hillary Clinton wants to go even further by directly taxing big banks, and taxing them even more if their capital structure is relatively risky. Matt Yglesias runs down her plan for us:

Clinton doesn’t spell out precise numbers for her fee, perhaps recognizing that in the real world this would all be subject to negotiation in Congress anyway. But the key pillars are:

The upshot of all this would be to nudge the banking system toward institutions becoming either smaller or else more boring, because risky activity would be more profitable in a smaller institution than in a larger one. The result would be to push risk out of the kinds of institutions whose failure would be catastrophic, without impeding banks’ ability to become big per se.

So wonky. So boring. But, as Yglesias says, also a pretty good idea. That’s often the case with well-thought-out plans.

In any case, the Fed plan affects the eight biggest banks in the country. Hillary’s plan would affect 34 banks. And of course, the eight mega-banks would have to abide by the Fed’s higher capital requirements and Hillary’s tax.

All of these plans, by the way, are roundabout methods of reducing the amount of leverage that big banks can engage in. As a purist, I’d prefer to just pass rules that directly regulate leverage levels. But that’s easier said than done, and higher capital requirements are a close substitute. Hillary’s plan is even more indirect, but it also reduces risk by nudging banks to get smaller. Lots of leverage is still bad, but a smaller bank that goes bust is less catastrophic than a bigger one that goes bust.

More details are here, part of the Clinton campaign’s rather startling array of detailed policy statements. It’s enough to make you think she might be a wee bit more serious than anyone on the Republican side.