Tyler Cowen thinks we’re all being too hard on Ben Carson for his belief that the pyramids were built by Joseph to store grain:

We mock Ben Carson for this, but we do not make fun of those who believe openly in the Trinity, Virgin Birth, ex cathedra, and many other beliefs which are to my mind slightly less plausible claims. It’s not so different from the old prejudice that Mormon beliefs are somehow “weirder” than those of traditional Christians, except now it is secularists picking and choosing their religious targets on the supposed basis of sophistication. The Seventh Day Adventists, Carson’s church, are of course weirder yet.

….What I find strangest of all is not Ben Carson’s pyramids beliefs, but rather the notion that we should selectively pick on some religious claims rather than others. The notion that it is fine to believe something about a deity or deities, or a divine book, as long as you do not take that 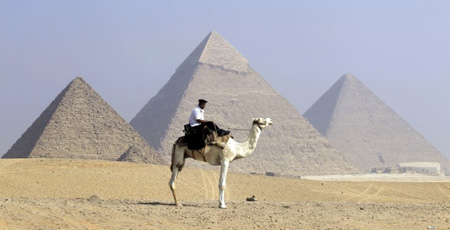 said belief very seriously and treat it only as a social affiliation or an ornamental badge of honor.

Generally speaking, I agree. As a nonbeliever, I find pretty much all religious beliefs pretty odd. Some I find odder than others, but this is just a literary reaction. I also find Lovecraft odder than Baum, but is he really?

But here’s what Cowen misses about the pyramid thing: it’s not even a religious belief. Muslims don’t say the pyramids were for grain storage. Neither do Mormons or Jews or Christian Scientists or Southern Baptists or Catholics or Seventh Day Adventists. There’s nothing in the Bible about this. It’s not a religious belief. It’s just Carson’s weird, personal theory.

What’s more, this isn’t something like evolution or the Big Bang, where the evidence is arcane enough that lots of people feel comfortable dismissing it. Our knowledge of the pyramids is plain and unambiguous. I mean, thousands of Christian tourists have been inside. They aren’t hollow. They have lots of passages and rooms. We’ve found burial chambers and sarcophagi. We can read the hieroglyphics on the walls. Anyone with a TV set knows this.

What’s more, Carson’s defense is ridiculous. He figures Joseph needed something big to store all that grain in the Bible, and something that big would still be around. But why? He could have stored it in lots of little things. He could have stored it in medium-sized things. Ten thousand silos a few yards on a side would have provided the same amount of storage space and been a helluva lot easier to construct. Only an idiot would store grain in a few humongous pyramids. Was Joseph an idiot?