The new Case/Deaton paper about the rise in white deaths from suicide, alcohol, and drug overdoses has inspired a lot of discussion about why Americans are apparently so despondent these days. Paul Krugman goes so far as to call it “existential despair.”

I hate to throw a wet blanket on this pity party, but perhaps we should take a look at a few other data points before we decide that America is on the brink of a mass Jim Jones extinction event. For starters, here’s a map from the 2015 World Happiness Report. Basically, it shows that most rich countries are pretty happy, including the United States: 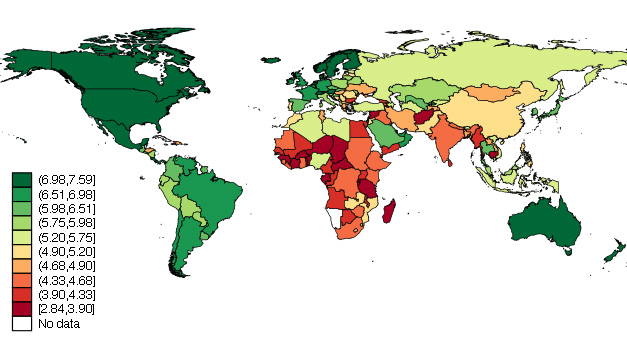 For the record, we came in 15th. That’s toward the low end of rich countries, but still pretty happy. Next up is a long-running Gallup poll about personal satisfaction:

Not much change there over the past few decades. Here’s the Gallup mood tracking poll:

Not much change there either. Here’s the University of Michigan consumer sentiment survey:

It goes down during recessions and up when recessions end. Finally, here’s the Pollster aggregate of the right track/wrong track polls beloved of pundits everywhere: 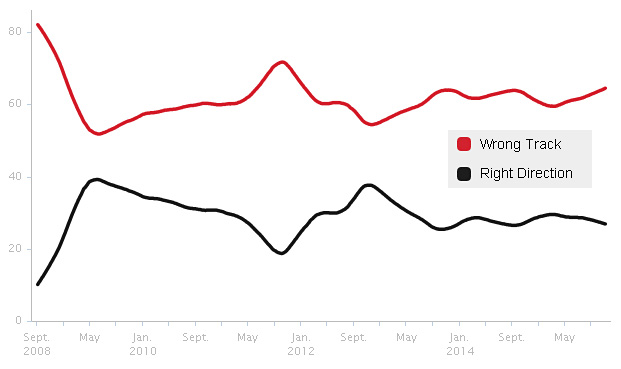 “Right track” took a big jump after Barack Obama was elected president, and then dropped back into the high 20s, where it’s pretty much stayed ever since.

If you listen to a lot of Fox News—or pretty much any news, to be fair—you’d think Americans lived lives of torment and despair. But if you actually ask them how they feel, nothing much seems to have changed recently. If you plot the right/wrong track polls back further, I think you’ll see a long-term decline, which suggests that Americans are, indeed, increasingly frustrated by politics. But apparently they don’t really care much about it either, since they remain pretty chipper regardless.

Now, I just pulled these charts sort of randomly, and perhaps there are others that show something different. I’m wide open to seeing them. I just think that if we’re going to talk about “existential despair,” we should at least engage with the data a bit. And as near as I can tell, the data suggests that Americans as a whole are about as happy and satisfied with their lives as they’ve ever been. This doesn’t necessarily mean that white Americans—the subject of the Case/Deaton paper—are as happy as they’ve ever been, but if you want to make the case that they’re increasingly morose, at least show me some evidence. OK?