I sort of promised myself that I wasn’t going to comment again on the whole mockery thing, but President Obama’s remarks yesterday are a pretty interesting case study of both the strength and weakness of mockery as a political tool. First, here’s what he said about refugees at a press conference in the Philippines. I have a reason for including a very long excerpt, but feel free to skim it since the details aren’t that important: 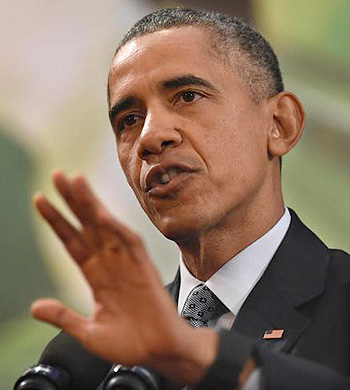 affected by the gruesome images that have happened there.

And it is important for us to be reminded that we have to be vigilant, that rooting out these terrorist networks and protecting the homeland is hard work, and we can’t be complacent or lulled into thinking somehow that we are immune from these kinds of attacks. That’s why we built an entire infrastructure over the last decade-plus to make it much harder for terrorists to attack us; to go after terrorists where they live and plan these attacks; to coordinate with our partners and our allies; to improve our intelligence. All the work that we’ve been doing in our intelligence communities and our military over the last decade is in recognition of the fact that this is something we should be concerned about and we’ve got to work hard to prevent it.

But we are not well-served when, in response to a terrorist attack, we descend into fear and panic. We don’t make good decisions if it’s based on hysteria or an exaggeration of risks. I think the refugee debate is an example of us not being well-served by some of the commentary that’s been taking place by officials back home and in the media.

Understand, under current law, it takes anywhere from, on average, 18 to 24 months to clear a refugee to come into the United States. They are subjected to the most rigorous process conceivable. The intelligence community vets fully who they are. Biometrics are applied to determine whether they are, in fact, somebody who might threaten the United States. There is an entire apparatus of all of our law enforcement agencies and the center that we use for countering terrorism to check and ensure that a refugee is not admitted that might cause us harm.

And, if anything, over the last several years that the refugee crisis has emerged in Europe, we’ve been criticized that it is so cumbersome that it’s very difficult for us to show the kind of compassion that we need to for these folks who are suffering under the bombings of Assad and the attacks of ISIL. They’re victims of this terrorism.

And so if there are concrete, actual suggestions to enhance this extraordinary screening process that’s already in place, we’re welcome — we’re open to hearing actual ideas. But that’s not really what’s been going on in this debate. When candidates say, we wouldn’t admit three-year-old orphans — that’s political posturing. When individuals say that we should have a religious test and that only Christians — proven Christians — should be admitted — that’s offensive and contrary to American values.

I cannot think of a more potent recruitment tool for ISIL than some of the rhetoric that’s been coming out of here during the course of this debate. ISIL seeks to exploit the idea that there is a war between Islam and the West. And when you start seeing individuals in positions of responsibility, suggesting that Christians are more worthy of protection than Muslims are in a war-torn land, that feeds the ISIL narrative. It’s counterproductive, and it needs to stop.

OK. Got that? That was the first two minutes of Obama’s remarks. He acknowledged the problem. He also acknowledged that a renewed fear of terrorism in the wake of the Paris attacks was understandable. He explained that our screening process for Syrian refugees is extremely stringent. He said he didn’t want to play into the hands of ISIS by stoking fear of Islam, and he criticized politicians who did so. No mockery. Just plenty of education and some tough words for partisan fearmongers.

Then he said this:

And I would add, by the way, these are the same folks oftentimes who suggest that they’re so tough that just talking to Putin or staring down ISIL, or using some additional rhetoric somehow is going to solve the problems out there. But apparently, they’re scared of widows and orphans coming into the United States of America as part of our tradition of compassion. First, they were worried about the press being too tough on them during debates. Now they’re worried about three-year-old orphans. That doesn’t sound very tough to me.

That’s mockery. And here’s the problem. Obama started off by speaking for a full two minutes calmly and rationally—exactly what I think he should have done. Then he briefly offered up a bit of mockery. I actually think that’s OK too because it was prefaced with a deep and sustained acknowledgement of the problem at hand.

This is hardly surprising. The explanatory stuff is boring. How many of you read it all the way through? The mockery, on the other hand, is short and it makes great copy. Of course that’s what everyone is going to focus on.

On the bright side, this means Obama got some press and the liberal base got stoked. On the downside, it means that your average reader got the impression that Obama tossed out a few jibes at Chris Christie and Ted Cruz and that was it. You don’t even have to quote him out of context to make it look like he doesn’t really care much about fears of refugees.

That’s the risk of using mockery. Used on its own, it makes ordinary people feel like you’re clueless and condescending. But even if you do it right, as Obama did, the way it’s reported can end up having the same effect. And that effect is exactly the opposite of what liberals would like to accomplish. So if you care about the real world, and you care about public opinion, keep the mockery to a minimum. That doesn’t mean you can’t fight back, and it doesn’t mean you have to go easy on the fearmongers. You can do both. Just do it in a way that doesn’t immediately turn off the very people you’d like to persuade.