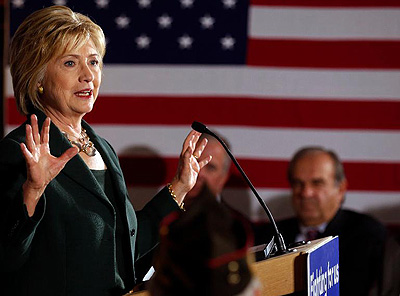 It’s time to begin a new phase and intensify and broaden our efforts to smash the would-be caliphate and deny ISIS control of territory in Iraq and Syria. That starts with a more effective coalition air campaign….We need an immediate intelligence surge in the region, including technical assets, Arabic speakers with deep expertise in the Middle East and even closer partnership with regional intelligence services….We can and should support local and regional ground forces in carrying out this mission….We may have to give our own troops advising and training the Iraqis greater freedom of movement and flexibility.

….Ultimately, however, a ground campaign in Iraq will only succeed if more Iraqi Sunnis join the fight. But that won’t happen so long as they do not feel they have a stake in their country or confidence in their own security and capacity to confront ISIS….We need to lay the foundation for a second Sunni awakening. We need to put sustained pressure on the government in Baghdad to get its political house in order, move forward with national reconciliation.

….We should retool and ramp up our efforts to support and equip viable Syrian opposition units….Increased support from our Arab and European partners….no-fly zones….create safe areas where Syrians could remain in the country, rather than fleeing toward Europe.

….Arab and Turkish partners….military intelligence and financial contributions….We need to get Turkey to stop bombing Kurdish fighters in Syria who are battling ISIS, and become a full partner in our coalition efforts against ISIS. The United States should also work with our Arab partners to get them more invested in the fight against ISIS.

For anybody who’s been following this stuff, none of this should come as a surprise. At this point, I’d call it the conventional wisdom on ISIS: a stronger air campaign; local ground troops; political reconciliation in Baghdad; and better alliances with Turkey and our Arab allies. The truth is, this speech could have been given by any thoughtful Republican too. They would have spiced it up with a few more references to unspeakable evil and wars against civilization, and they would have pretended that all this stuff would be easy if we didn’t have an appeaser in the White House, but the practical advice wouldn’t differ much. As near as I can tell, that’s because there just aren’t many alternatives.

Now, the obvious problem is that all of this is easier said than done. A bigger air campaign is easy. But turning the Iraqi army into a competent fighting force is harder. Pressuring Baghdad to get its house in order is even harder. And a diplomatic solution in Syria that frees up local rebels to fight ISIS is so hard that I doubt we can do it.

So in a sense, this all boils down to competence. Roughly speaking, everyone agrees on the basic outline of what needs to be done. The question is which candidate is most likely to be able to do it. It’s easy to figure out that, say, Ben Carson and Ted Cruz are at the bottom of that list. But who’s at the top? Who do you trust the most to make progress on all this stuff? That’s where the hammer and the nail finally meet.