How does climate denial work? Who funds it? In the Proceedings of the National Academy of Sciences, Justin Farrell used network analysis to take a detailed look at a massive corpus of 41,000 texts written between 1993 and 2013 and came up with an unsurprising answer to the second question: ExxonMobil and the Koch family foundations are the 800-pound gorillas here. But it’s not just 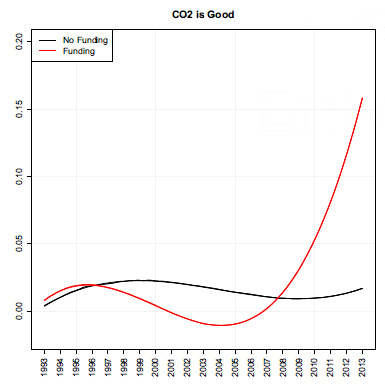 direct contributions from these two that matter. They also act as a signal of approval for everyone else: “Donations from these corporate benefactors signals entry into a powerful network of influence,” Farrell says.

Perhaps the most intriguing finding, however, is that climate denial is faddish. Certain themes get hot for a while and then get replaced by others. For example, take a look at the chart on the right. Is CO2 good? Well, sure: without it all of Earth’s plants would die and then we’d die too. Duh. But around 2008 we saw a spurt of op-eds and videos telling us that since “CO2 is life,” then more CO2 must be a good thing, not a bad one. Remember those? But what prompted this idiocy? As the chart shows, organizations that received no funding from corporate denialists never adopted this meme. But among organizations that did receive funding, the “CO2 is life” meme skyrocketed.

You can see similar dynamics with other denialist memes, which have all had both fallow and active periods. Interestingly, though, the four memes Farrell studied are all in active periods right now. Hyperactive, even. And those memes all took off at the same time: around 2007-09. This might be related to the public embrace of Al Gore’s Inconvenient Truth, or it might be related to the election of a Democratic president. Or both. Farrell’s research doesn’t tell us. Just for the record, though, here are the four memes he identified. I have taken the liberty of translating them into language we can all understand:

According to Farrell’s data, all of these memes are still in full flower. This is surprising since I haven’t seen the “CO2 is life” nonsense lately. Maybe it’s just gone underground. In any case, now you know where it comes from.