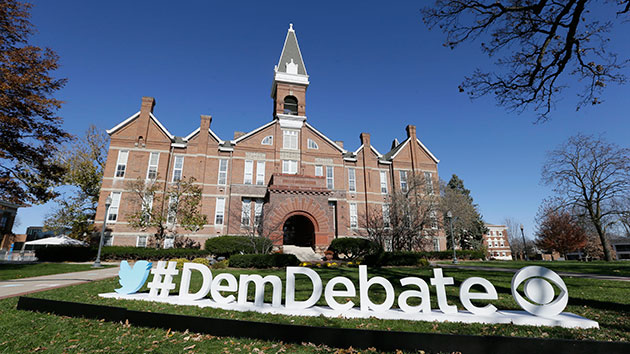 I feel like everyone did their best to pretend they disagreed on a few issues here and there, but let’s face it: the pickings were slim. Gun control is a red herring; they’re all on the same page. They all have the same goals on health care, but disagree about what’s politically feasible right now. They all want lots of free college, but some want a little more than others. Etc.

There were two areas of genuine disagreement. The first is foreign policy, but everyone worked hard to stay anodyne, so none of the disagreements really came out. This is likely just because Hillary didn’t want to get too hawkish in front of a Democratic primary crowd.

The second is financial regulation. Speaking for myself, I like Bernie’s rhetoric, but I have to say that Hillary’s actual proposals sound better. She’s right to be skeptical about reinstating Glass-Steagall. She’s right to talk about shadow banking, which neither of the others did. And she’s right to go easy on the idea of breaking up big banks. Higher capital levels for money-center banks will rein in their growth and make the banking system safer at the same time.

As with the last debate, I doubt many minds were changed tonight. Nobody made any big gaffes, nor did anybody say anything that’s likely to provoke a lot of new attention. The attacks on Hillary Clinton were few and mild, and she had no problem with any of them. I actually think Bernie did a 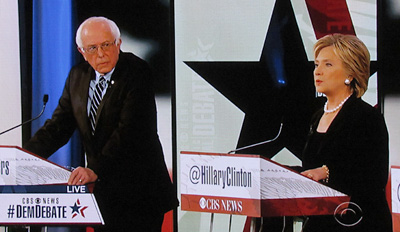 little better than he did in the first debate, but not enough to make a difference. Basically, Hillary did fine, and that was all she needed to do. I guess I’d give Sanders an A- and Clinton a B+.

The moderators were OK, though they had a way easier task than the poor saps trying to keep control of the Republican slugfests. But I was pretty disappointed in John Dickerson’s foreign policy questions, which seemed designed to be clever, rather than to pin down the candidates on what they’d actually do to fight ISIS. The crisis question toward the end was pretty fatuous, and it was also way too tilted in favor of Clinton. More generally, Dickerson hardly ever drilled down and tried to press the candidates on anything they said. I’ll acknowledge that this was partly because the candidates didn’t spout lots of transparently ridiculous nonsense, but there were still a few occasions when he could have been more forceful.

It’s nearly time to start. I figure this should be a leisurely liveblogging session since I’m planning to tune out whenever Martin O’Malley is talking. Nothing personal, but when you’re polling at 3 percent in a 3-person race, you’re just not a factor. Sorry.

10:52 – Sanders: Lots of stuff about America sucks. We need a political revolution. Also gets big cheers.

10:50 – O’Malley says we shouldn’t return to divisive figures of our past. Gee, I wonder who he could be referring to?

10:47 – O’Malley just flat-out admits that he hasn’t really faced any big crises. But he has faced emergencies.

10:41 – Once again, poor Martin O’Malley gets cut off for a commercial break. Somebody at CBS really has it out for him.

10:40 – Clinton: “If I lived in Iowa I wouldn’t want Terry Branstead administering my health care.” Big cheers. This is indeed a problem with letting states administer health care.

10:35 – Sanders seems to think that states will be eager to chip in money to make college free. They sure haven’t shown any such eagerness over the past few decades.

10:32 – Clinton is weaseling on whether she approves of student activism at U of Missouri. She appreciates the passion, but also thinks everyone should maintain respect for others.

10:23 – How would Sanders actually get anything done in the face of Republican opposition? All the wonks are probably thrilled with this kind of process question, but really, what possible answer can he give?

10:21 – Is Glass-Steagall really a big deal among the voters? How many people even know what it is? In any case, the meltdown of Wall Street came from both big firms and smaller ones. AIG was an insurance company. Washington Mutual was a pure bank. Citigroup was a huge conglomerate. Lehmann was in investment bank. Reserve Primary was a money-market fund. They all failed. Smallish banks failed too. Repealing GS really doesn’t seem like it was a major cause of the financial collapse. And it had nothing at all to do with the shadow banking sector, which played a huge role in the meltdown.

10:13 – Sanders makes sure this time to say that he’s not referring to Clinton when he talks about people yelling at each other.

10:10 – Now we are going to pretend that Hillary and Bernie have anything more than a sliver of difference on gun control.

10:08 – Glass-Steagall again. Give it a rest, folks. Repeal of GS just isn’t at the core of anything.

10:06 – Bernie really wants to break up the big banks. This will never happen, and wouldn’t really solve the big problems anyway.

10:05 – Finally, a fight! Bernie says Hillary will sell out to Wall Street. Hillary says Bernie has impugned her integrity. Hillary then says her 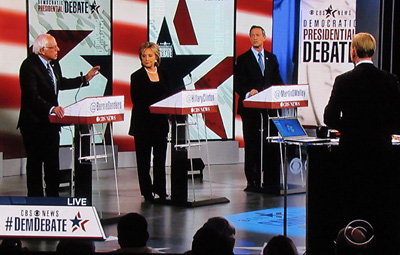 financial proposal is actually broader and tougher than Bernie’s.

10:01 – Clinton brings up the shadow banking industry again. But, as in the first debate, she doesn’t really explain it. (Granted, that would be pretty tough in 60 seconds.)

9:55 – Now we’re desperately trying to create some conflict over slightly different positions on the minimum wage. Clinton wants $12 with higher local wages. Sanders and O’Malley want 15 bucks everywhere. I hate to be such a sellout, but I’m with Clinton on this.

9:45 – O’Malley just broke the rules. Apparently the rule in this case is that you have to shut up when it’s time for a commercial break.

9:43 – Clinton: Obamacare is great, and we should make it even greater. But she talks more about insurers than providers. That’s a mistake.

9:41 – Sanders: Tax the wealthy until they scream. How high? Less than 90 percent. Ha ha ha. But no answer to the question.

9:37 – Clinton: no tax increase on middle class. Instead, tax the wealthy and close loopholes the rich take advantage of.

9:30 – There’s just no disagreement to speak of so far. Partly this is because Dickerson’s questions have been terrible. He’s desperately trying to provoke a fight instead of demanding real answers about how we should fight ISIS.

9:28 – I think Bernie now has everyone saying Mooslims.

9:27 – How many minutes have we now spent arguing about the term “radical Islam”?

9:21 – Clinton trying to suggest Libya was a great success except for an “arc of instability” that Libya unfortunately just happened to be in the middle of.

9:15 – The candidates refuse to attack each other enough, so now John Dickerson is just flat-out begging them to attack.

9:14 – So far, nothing of real substance from anyone on terrorism or foreign affairs.

9:13 – Oh, I get it. They aren’t in boxes. That’s just the background. Weird. I might never have figured that out if it weren’t for Bernie Sanders waving his arms around.

9:11 – Why is CBS putting the candidates in little square boxes?

9:09 – Clinton says we should support others in fight against ISIS, but not make this into an American war.

9:04 – A few days ago I joked that Republicans were going to demand that their website addresses be stenciled on the front of the podiums. But I had the wrong party. At tonight’s Democratic debate, they all have their Twitter handles on their podiums. Boringly, though, I guess this is only because Twitter is cosponsoring the debate.

8:57 – The big pre-debate news is a Yahoo story saying that Bernie Sanders’ rep went postal on a conference call this morning with CBS because he was unhappy over plans to begin the debate with foreign policy questions. I don’t blame him, but seriously, what did he expect? There’s more than a hundred dead in Paris following a series of coordinated terrorist strikes. What the hell else would you open the debate with?