I’ve wanted to use this headline1 for a long time, and now I have. I guess I could just end this post right there, or maybe ramble on about how Hunter S. Thompson’s 1972 collection of campaign reporting was one of the books that got me interested in politics in the first place. Me and a million others, I suppose.

But no. I actually have a point to make, and I will get around to making it, I promise. First, though, I’m turning over the mic2 to my great-grandblogger3 Martin Longman. He was bemused by blogger Tom Maguire’s casual 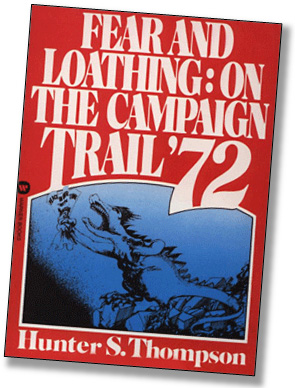 acceptance that fear is a perfectly reasonable emotion to exploit in a political campaign:

At first, I was offended. Then I realized that we’re both probably correct in our own way, but with limitations.

I’m sure if I challenged him, Maguire would recite countless examples of Democratic politicians exploiting the fears of the electorate. These would be fears about the Supreme Court overturning Roe v. Wade, or fears about NSA surveillance, or fears about grandma losing her Medicare or Social Security….I think this is different in kind, though, than using fear itself as a political tool….What’s really bad, in my opinion, is to deliberately increase people’s sense of insecurity not primarily so that they will demand policies to keep them safe but to make them more inclined to vote for you and your political party. Making people afraid for political gain is cynical and almost cruel.

As Longman suggests, this is a mighty thin line to draw, and I’m not sure it’s the right line anyway. Here’s the thing that liberals tend not to want to accept: different people evaluate threats in far different ways. This is not right or wrong. It’s just human nature.

I tend to be almost absurdly non-fearful, for example. This is not because I’m brave in the usual sense: I run from fights at the first opportunity and I have no idea if I’d rescue a drowning child from a watery maelstrom. I’m talking about more abstract fears. Should you be afraid of being mugged? Afraid of terror attacks? Afraid of earthquakes?6 In my case, I never even bother getting out of bed if I feel an earthquake. I just roll over and wait for it to stop.

This is, by almost any measure, stupid. Sure, most earthquakes around here are fairly small. But not all of them. Wouldn’t it make sense to at least hop out of bed and get ready in case my house starts to collapse? Yes it would. I’m putting my life in danger by underplaying the threat.

This is not because conservatives were smarter the first time and we were smarter the second time. It’s because, at a very deep level, we react to threats differently. There’s no purely objective way to decide who’s right and who’s wrong in any particular case, but I think you can reasonably say that sometimes conservatives are closer to right and sometimes liberals are closer to right.

So what’s the right response to terrorist attacks? I can’t even imagine being personally afraid of one. The odds of being targeted by some insane jihadist are astronomical. But a vast number of people feel very, very differently.7 At a gut level, they’re afraid that what happened in Paris and San Bernardino could happen to them—and they want something done about it. Are they right? Or am I right? Who can say?

But that’s why conservatives are exploiting this fear. Conservatives consider terror attacks a serious and alarming threat. Liberals tend not to, which is why our politicians mostly adopt a pretty even tone about them. In both cases, this response is politically useful. Mainly, though, it’s genuinely how they feel. Conservatives really do feel threatened. Liberals really don’t.

Keep this in mind. It’s not a sham. It’s not just cynicism. I happen to think conservatives are wrong about this, and I think their campaign-trail exploitation of terrorist fear has gone far beyond anything even remotely reasonable. But at its core, this is a real disagreement. How safe are we and what should we do to increase our safety? When you cut through the bombast, there’s a very hard, very bright, very deep, and very human core of division here. And there’s no guarantee that you or your tribe has the right take on it.

1Yes, I know I’ve punctuated it differently than the book.

2Even though I’m officially an old person, I am adopting the Washington Post dictum that mike is no longer acceptable shorthand for microphone in modern America. It lives on in the NATO alphabet, though.

3Longman4 is my third successor as blogger at the Washington Monthly.

4Or “Phil’s brother,” as his closest friends call him.5

7This is clear both anecdotally and via polling. I know personally plenty of people who are afraid of a terrorist attack. And recent polls are quite clear that a large majority of Americans are concerned about further attacks.