MUIR: You have weighed in already on Donald Trump….What would you say to the millions of Americans watching tonight who agree with him? Are they wrong?

HILLARY CLINTON: Well I think a lot of people are understandably reacting out of fear and anxiety about what they’re seeing….Mr. Trump has a great capacity to use bluster and bigotry to inflame people and to make think there are easy answers to very complex questions.

I suppose this is the “right” answer in some sense, but if you take seriously the framing of the question—what would you say to Trump’s supporters?—it’s condescending and offensive. You’re telling them that they only support Trump because they’re scared, not 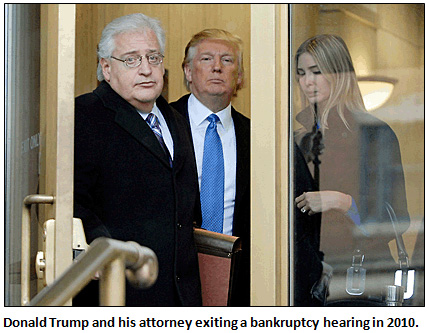 because they have legitimate beefs. That’s not likely to win many converts.

I’m a little surprised that no one has taken the approach toward Trump that strikes me as having a better chance of success. Basically it has two parts:

#1: Trump is a mediocre businessman. He talks big about his golf resorts, but they don’t make a lot of money. His casinos in Atlantic City went bankrupt because he managed them poorly and didn’t understand the business. He doesn’t have a lavish property empire. He’s built or renovated half a dozen major buildings, and they’ve done OK but nothing more than that. There’s no evidence that he negotiates especially great deals, just fairly routine ones. He’s thin-skinned and goes to court—or threatens to—over every perceived slight. Basically, Trump inherited a lot of wealth and hasn’t done all that much with it. Someone should ask him to show us financial statements for his development business. Not licensing and TV. Just development. How much have earnings increased over the past decade? What’s his return on equity? Return on investment? Etc.

#2: Trump is a blowhard, and we all know blowhards, right? They BS constantly because they don’t know squat. They talk big and they never deliver. That’s Trump. What makes anyone think he’ll deliver on all the BS he’s ladling out right now?

Trump has built two successful businesses based on being a blowhard. He has a nice licensing business, and he made a nice chunk of change from The Apprentice. That’s about it. In every business that required him to actually deliver something concrete, he’s been average or worse.

Trump has built his campaign on the proposition that he’s a great builder and a great negotiator, and for some reason his opponents have all let that slide. I don’t really understand why. Take away his mouth and he’s just another guy who inherited a bunch of money from his father and used it to build a middling business. It’s nothing to be ashamed of, but it hardly makes him a dazzling executive, either.