Marco Rubio has been the subject of attention lately for his apparent lack of effort in the presidential race. He doesn’t campaign much. He hasn’t opened many field offices. He doesn’t spend any time in the Senate. What’s the deal?

Republican activists — including many who appreciate Rubio’s formidable political gifts and view him as the party’s best hope for beating Democratic presidential front-runner Hillary Clinton — say they are alarmed at his seeming disdain for the day-to-day grind of retail politics….That may be, as some of his allies fret privately, a sign of overconfidence in his own abilities. Or it may be a smart strategic decision that the personal touch is overrated in an era in which celebrity billionaire Donald Trump is 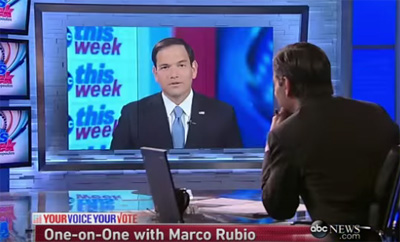 leading the field with a campaign that consists largely of mega-rallies, barrages of tweets and television interviews that are literally phoned in.

This is something I’ve wondered about for a long time. It’s an article of faith that running for president is an almost inhuman grind. Up every day at 5 am, pressing the flesh and delivering your standard stump speech in five cities by nightfall, then off to a Holiday Inn and bed at 1 am. Four hours later, rinse and repeat. It’s grueling beyond belief. It’s as if you don’t deserve to be president unless you first go through this hazing ritual.

But why? This is the United States, not Phi Gamma Delta. Especially in the modern era, I doubt that personal appearances really account for that many votes. And even if they do, why nominate a candidate who’s good at this kind of retail politics? Even if it works in Iowa, it sure isn’t how you win a general election. What you really want is a candidate who can debate well, who can hire a great staff, who can raise trainloads of money, who does well on television and social media, and who cuts great TV ads. Spending a long series of exhausting days to win a few dozen votes per event doesn’t make any sense.

I actually think this has been true for a long time—at least 20 years, maybe longer. Small-scale retail politics may still have a place, but it’s a small place. And running yourself ragged is far too great a price to pay for the minimal return it buys you. Whatever else Rubio is or isn’t doing right, I think his “disdain for the day-to-day grind of retail politics” makes perfect sense. The rest of the world just hasn’t caught up to him yet.