Jack Shafer is unhappy about calls to stop giving Donald Trump the attention he so obviously craves:

Ever since Donald Trump appeared on Campaign 2016’s horizon, journalists have been imploring other journalists not to cover him….The logic behind the Trump blackout proposals vary, but usually boils down to this: Any attention given to his retrograde “ideas” only end up giving his candidacy additional velocity. But just because Trump is a potential menace to society…why does that mean TV should give him the blind eye? The more hateful and demagogic a politician the more you should cover him, right? 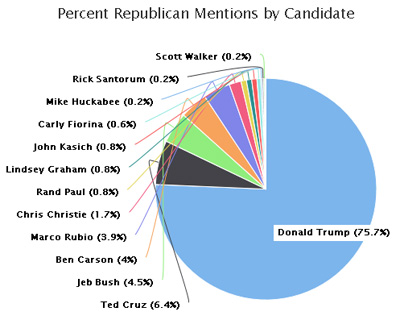 self-censor anything that might possibly encourage a “bad” outcome. Sometimes newsgathering stimulates a happy result, but it’s not the only way to judge the worthiness of a story.

In order to write this piece, Shafer needed someone to call for a ban on Trump coverage. And finally, a few days ago, someone did: former CNN anchor Campbell Brown wrote a piece suggesting a one-week boycott of Trump coverage. To my ears, Brown’s proposal sounded a bit Swiftian, but no matter. It gave Shafer the chance to write an easy column making the obvious case against banning Trump.

But why write an easy column? Why not wrestle with the real issue: the fantastic overcoverage of Trump on cable news? I doubt that any candidate in history running in a genuinely contested primary has gotten the kind of lopsided coverage Trump has. In the past month, he’s gotten more coverage than every other Republican candidate combined. In the past week, he’s gotten an astonishing 3x the coverage of every other candidate combined. Forget about whether this is good for America. Doesn’t it demonstrate some seriously flawed news judgment within the press corps? As though news outlets are more interested in sensationalism and ratings than in reporting what’s genuinely newsworthy? That’s debatable, for sure, but it’s exactly the kind of debate a press critic should weigh in on.

But Shafer cavalierly waves this off: “The notion that the press has dreadfully overcovered or tragically undercovered a topic is the idiot’s version of press criticism. No perfect dose of journalism can be prescribed for every subject. But if you still think that the TV news operations are overcovering Donald Trump, I have a simple suggestion. Unplug your television instead of asking the news channels to turn off their cameras.”

Well, then, call me an idiot. Shafer is right that partisans routinely think their guy is undercovered and the other side’s guy is overcovered. In this case, though, the evidence is overwhelming that Trump is getting vastly more coverage than any serious assessment of his news value justifies. And turning off my TV doesn’t change this, any more than turning off my TV will end poverty or put ISIS out of business.

Shafer is too sharp to waste his time on straw men. Instead, how about a look at why the press corps is so smitten with Trump? Is it because he’s a godsend for campaign reporters who love easy stories that save them from having to dive into tedious stuff like taxes and abortion and all the other chestnuts we argue fruitlessly about every four years? Is it because news directors crave ratings far more than news value? Or is it because Donald Trump somehow justifies the coverage he’s getting? If so, let’s hear the argument. I don’t know if this is likely to win the morning or not, but now that we’ve reached the point where Trump is getting 75 percent of all cable news coverage, isn’t it a question worth asking?