The chart on the right comes from Heterodox Academy, a group founded a few months ago to promote more ideological diversity on university campuses. What it shows is unsurprising: over the past few decades, university faculties have 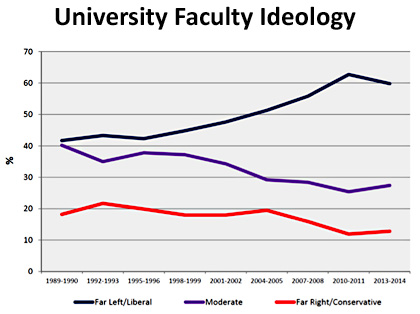 become almost entirely liberal. And this is for all university faculty. According to HA, humanities and social science faculty are closer to 95 percent liberal.

Why? Paul Krugman thinks it’s because conservatives went nuts starting in the 80s, so nobody with any intelligence and genuine curiosity wants to associate with them anymore. Michael Strain suggests that it might be because faculties actively discriminate against conservative job candidates. This argument has been going on forever, and there are a few basic points of view:

Needless to say, all of these interact with each other, and more than one may be right. But here’s what I don’t get: why the endless argument? These all seem like eminently testable hypotheses:

If, say, 95 percent of job candidates are liberal, then there’s probably no discrimination. Conservatives are being hired in proportion to their numbers. If conservatives generally don’t major in the liberal arts as undergrads, then probably PhD programs aren’t discriminating either. Etc. These all seem like fairly answerable questions.

Most likely, there’s a vicious circle involved. As the American right became more conservative while the liberals arts became (say) modestly more liberal, it would make sense if conservatives just didn’t feel like joining up. This naturally produced a more left-leaning liberal arts faculty, rinse and repeat. Eventually you end up at 95 percent.

But why guess? Can’t these questions at least be suggestively answered?

For what it’s worth, I agree that it’s a problem regardless of how it happened. It’s easy for liberals to see the conservative bubble when we talk about Fox News or talk radio, and we immediately understand why it’s bad: it makes people lazy and unwilling to question their basic beliefs. We don’t see this so clearly when it’s our own bubble, but we should. Bubbles are bubbles, and ours are no better than theirs.

And now to end on a griping note: I would be a lot more sympathetic to conservative complaints about the academy if they showed an equal concern about fields that lean heavily conservative (big business, the military, etc.). For some reason, though, that never seems to strike them as a problem. Why?