Petula Dvorak has gotten a lot of, um, pushback for this column about the kids these days—including hers:

The work ethic of our kids: Where is it? Where are the entrepreneurial snow shovelers? For generations of enterprising children, snowflakes may as well have been dollar bills, y’all, falling from the sky. Kids jostled to 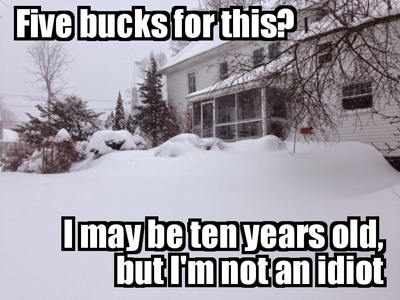 be the first to ring the doorbells of the snowed-in, the $5 driveways added up, and that new Atari Defender game cartridge, those rainbow Vans — yours and yours.

….Last year, when we had a mere dusting compared with Snowzilla and the boys were 8 and 10 years old, they shoveled our stairs and sidewalk with verve, and then struck out to ring doorbells to make a buck. The novelty of responsibility was fresh and delicious.

They got three customers: a politician’s wife who was encouraging and delightful, giving them a crisp $5 bill and a load of praise; another neighbor who paid $5; and $0 from a bleary-eyed millennial renter who promised to pay them but didn’t have cash. And never paid up long after the snow melted.

As school was closed for the big dig-out, I tried again to inspire some hustle in my little childlumps, whose only hustle was to get a sleepover going. “There are still lots of cars buried out there,” I said. “I bet you can make enough money for that Lego Poe Dameron X-Wing you want.” No spark in their eyes. What’s going on?

Hmmm. Last year the kids shoveled three houses and they each earned $1.66 per house for their efforts. This year the snow is far heavier. They could probably double their earnings! I wonder why they’re not feeling enthusiastic about this? It’s a head scratcher, all right.

As it happens, lots of kid jobs—snow shoveling, burger flipping, lawnmowing, etc.—have been largely taken over by adults these days. But the real issue here is that adults simply have no feel for inflation. Petula’s father probably got paid $5 for shoveling a walk in 1950, so that’s what he paid Petula. Now she wants to pay her kids $5. Ditto for everyone else in their generation. But $5 in 1950 is about $50 today.

Sure enough, a 30-second bit of googling suggests that the going rate for getting a neighborhood kid to shovel your walk is about $40 or so. More if the storm is heavy and you have a big lot. A professional goes for about $70.

Maybe kids these days are lazy. I don’t know—though the most recent kids I met were so smart and well-behaved that Marian and I were in awe. But hey—maybe they’re lazy too! I didn’t invite them to mow my lawn, after all. But this complaint about snow shoveling is just a personal version of that old chestnut, the business owners who complain they can’t find good workers but then admit they aren’t willing to raise their wages to attract them. Bottom line: don’t whine about lazy kids unless you’re willing to pay them enough to make it worth their time to work for you. For five bucks they’ll feed your cats while you’re on vacation. But only newbie suckers would shovel a walk after Snowzilla for that.