A trio of researchers from the University of Missouri and the University of Iowa have a new paper out that calls into question the correlation between lead emissions and violent crime rates. I want to comment on it, but with two caveats: 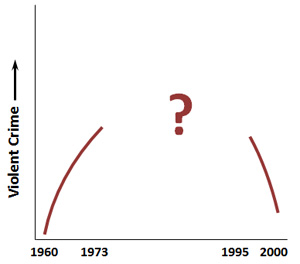 The problem is that there are two sources of data on violent crime (murder, rape, robbery, and aggravated assault). The first is the FBI’s Uniform Crime Report (UCR), which depends on reports from police departments around the country. The nice thing about the UCR is that it goes back a long way and the data is broken down by city. The bad thing about the UCR is that it can show spurious trends if police departments report crimes differently over time.

This is especially a problem with rape and aggravated assault. In the case of rape, we know that women became more likely to report rape over the past 50 years, and we also know that police departments took rape reports more seriously. So even if rape rates hadn’t changed at all, we’d probably still see an increase in the numbers.

In the case of aggravated assault, there’s no firm rule for what makes an assault “aggravated.” So it’s possible that the UCR numbers might be tainted simply because police departments have changed their standards for what counts as aggravated assault. This is a potentially serious problem since aggravated assault is one of the biggest components of overall violent crime rates.

So that’s the UCR. The second source of crime data is the National Crime Victimization Survey (NCVS), which relies on interviews with families to ask them if they’ve been victims of a crime. The nice thing about the NCVS is that it gets 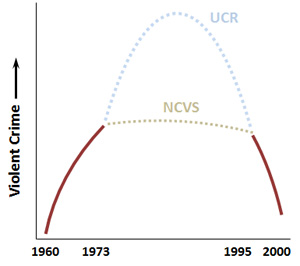 around the police reporting problem. The bad thing about the NCVS is that (a) it only goes back to 1973, and (b) surveys can have methodology problems too. In particular, there were several criticisms of the original NCVS that were addressed in a redesign that started up in 1993. So there are some known issues in the period from 1973-93.

So which one is more accurate? There’s no way to know for sure, but the authors of the paper use the following methodology to arrive at a good guess:

I have a few comments about this study, but I want to emphasize again that I’m a layman. These aren’t serious methodological critiques. They’re just observations that I hope others will pick up on and look into. That said, here they are:

One final note. If I had one thing to do over in my 2013 article, I think I’d dump the chart showing the overall national correlation between lead and crime (the subject of this paper). It’s obvious why it was included: it’s a visually dramatic statement, and historically speaking it was the observation that started research into lead and crime. But there’s a reason I wrote my

piece in 2013: that was when the evidence started really piling up in favor of the lead theory. The national correlation by itself would never have been enough to justify writing the piece. In fact, it’s easily the least important part of the whole argument, and placing it front and center did nothing except prompt endless choruses of “correlation is not causation!” from people who don’t read beyond the pictures. I wish I’d never included it.

So what is important? On a statistical level, there are state-level correlations, city-level correlations, and, most importantly, international correlations. All of those together paint a very convincing picture. On an outcome level, there are prospective studies that track children with elevated lead levels. All of them show that they get arrested at higher rates the higher their childhood lead exposure. On a medical level, there are now brain scan studies that provide a plausible pathway for lead exposure to cause permanent neurological damage to parts of the prefrontal cortex associated with impulse control.

So that’s that. I have questions about this study, but I don’t have the chops to provide any answers. Hopefully other researchers will comment on this paper and eventually guide us to some firmer conclusions.