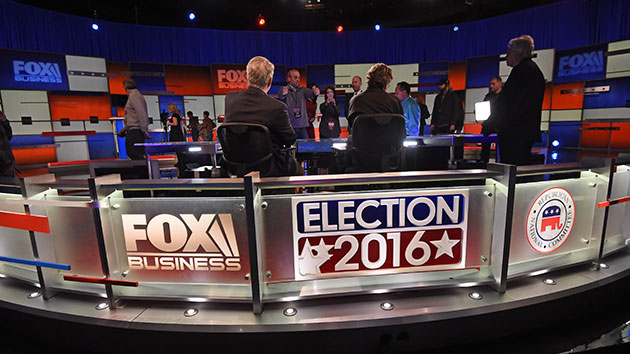 Overall, this was sort of a boring debate, though it heated up a bit at the end. On a substantive level, there’s not much to say: nobody really said anything new. I guess that’s just the nature of things when you get to the sixth debate. My take:

Bush: He relentlessly tried to be reasonable. Apparently he thinks that eventually this will be a winning strategy, and maybe he’s right! But not tonight. He didn’t do anything to help himself.

Carson: At his best, he was in snoozeville. At his worst, he was incoherent. He’s a goner.

Rubio: He’s a hard duck to analyze. Rubio basically has a bunch of index cards in his head, and he recites one of them whenever he gets a question. The thing is, his index cards aren’t bad. And he recites them reasonably well. But eventually they just get old. That’s how it felt tonight—until he pulled out a brand new index card and attacked Cruz hard at the end. It was a good attack! It might help him. Maybe.

Trump: Fairly quiet by his standards. He did well responding to Cruz about “New York values.” His closing statement about the sailors was probably effective. His endless prevarication on the 45 percent tariff was a loser. 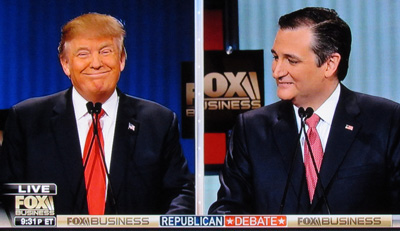 Not his most dynamic performance, but he did OK. His numbers will probably go up.

Cruz: He was good tonight. He handled the natural-born citizen thing pretty well. Trump pwned him on New York values, but that helped Trump more than it hurt Cruz. His explanation of his tax plan was pretty much incomprehensible, and it was made worse when Rubio went after it, but I think that was his only real stumble. He’s a good debater, and probably picked up a few points tonight.

Kasich: He seemed like an island, totally disengaged from everyone else on the stage.

Christie: As always, he tried to seem like (a) the adult in the room and (b) the toughest guy in the room. It worked OK tonight, and he might pick up a point or two. But nothing more.

Overall, I’d say Trump, Cruz, and Rubio might gain a bit. Bush and Carson will drop a bit. Kasich and Christie will stay in nowhere-land.

10:19 – Time for closing statements. Everyone breathes a sigh of relief.

11:11 – Ooh. Big attack on Cruz from Rubio. Cruz says half the things Rubio said were false. But what about the other half?

11:01 – Is it a blind trust if Don, Eric, and Ivanka Trump run the company? Um, no. Pretty sure it’s not. But I’ve actually been a little curious about what Trump would do with his company if he won.

10:55 – Big fight between Rubio and Cruz. Now Christie comes in to break it up. Let’s talk entitlement reform!

10:52 – Rubio says that Cruz’s tax plan would be bad for seniors. He’s right, but I doubt anyone understood what he said.

10:49 – Carson just gave an answer that I flatly didn’t understand. I’ll have to review it later.

10:46 – It’s tax time. I’m guessing everyone is in favor of cutting them. Especially on corporations and the rich.

10:41 – Cruz says Trump and Bush are both right about China. Such a peacemaker. The answer is a flat tax. Wait, what? What did I miss?

10:40 – Boos when Trump attacks Bush. The arena must have a big Bush cheering section.

10:38 – Rubio: the answer to all our problems is to do the opposite of Barack Obama.

10:36 – So…Trump says the NYT lied, but I guess they didn’t. Imagine that. Trancript here.

10:35 – OK, but what about the tariff, Donald? Blah blah blah. Biggest bank in the world has an office in his building. But he’s totally open to a tariff.

10:21 – Jeb Bush steps up and defends letting Muslims into the country. Good for him.

10:18 – These guys have lots of criticism of Obama, but they sure are shy about proposing actual concrete measures to step up the fight against ISIS.

10:15 – Should we send 20,000 ground troops to Iraq to fight ISIS? Carson says we should just give the military whatever they ask for. That’s it. And we should send in lots of special ops to put ISIS on the run. Uh huh.

10:11 – The fights between Trump and Cruz have been amusing, but generally speaking this debate has been pretty boring. Lots of canned applause lines and not a lot else.

10:10 – Does Saudi Arabia suck? Kasich says they need to stop funding radical clerics and madrasses. But what if they don’t?

10:01 – Sorry for the hiatus. So what’s going on? Guns? Looks like everyone is in favor of guns, guns, and more guns.

9:37 – The hamsters that power motherjones.com seem to be tired tonight. Sorry about that. If you’re having trouble commenting, keep trying!

9:30 – Audience booing Trump when he starts talking about polls.

9:27 – Audience not happy that Neil Cavuto asks Cruz about whether he’s a natural-born citizen. Cruz calls it a “birther” theory.

9:23 – Ah, an old favorite: Cruz turns a million-dollar loan from Goldman Sachs into an attack on the liberal media. That never gets old, does it?

9:19 – Carson: What if someone hit us with an EMP, cyber-attack, and dirty bomb all at once? That would be pretty bad.

9:18 – Carson already whining about not getting enough questions.

9:13 – Bush: ISIS has a caliphate the size of Indiana! Also, US military has been totally gutted. Can’t even project power anymore.

9:11 – I wonder if anyone is going to acknowledge that American sailors did cross into Iranian waters near a major military base?

9:09 – If economy collapses next January, Kasich will balance the budget. That should work great.

9:06 – Cruz just can’t wait to bring up the American sailors. Ugh. Apparently he would have nuked Tehran immediately upon their capture.

8:48 – What will Donald Trump say tonight? In just a few minutes we’ll find out!