National Review has finally released its big anti-Trump issue. A bevy of conservative stars contributed to the issue, and they complained about Trump’s boorishness, his ignorance, his bullying, his libertine personal life, his racism, his narcissism, his love of dictators, his vitriol, and the fact that he’d probably lose to Hillary Clinton. But the most common complaint was simple: Trump is no conservative. Here are a few snippets:

The Editors: Trump’s political opinions have wobbled all over the lot. The real-estate mogul and reality-TV star has supported abortion, gun control, single-payer health care à la Canada, and punitive taxes on the wealthy….Some conservatives have made it their business to make excuses for Trump and duly get pats on the head from him. Count us out. Donald Trump is a menace to American conservatism who would take the work of generations and trample it underfoot in behalf of a populism as heedless and crude as the Donald himself. 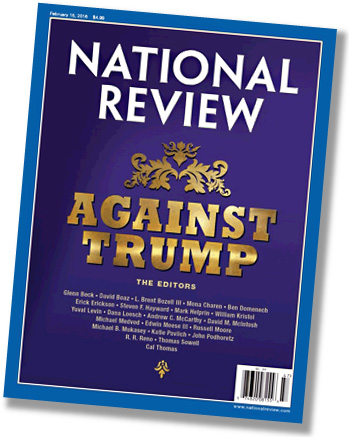 fought against the bank bailouts, Donald Trump called them “something that has to get done.”

Mona Charen: One thing about which there can be no debate is that Trump is no conservative—he’s simply playing one in the primaries. Call it unreality TV. Put aside for a moment Trump’s countless past departures from conservative principle on defense, racial quotas, abortion, taxes, single-payer health care, and immigration….Is Trump a liberal? Who knows? He played one for decades — donating to liberal causes and politicians (including Al Sharpton) and inviting Hillary Clinton to his (third) wedding. Maybe it was all a game, but voters who care about conservative ideas and principles must ask whether his recent impersonation of a conservative is just another role he’s playing.

David Boaz: Without even getting into his past support for a massive wealth tax and single-payer health care, his know-nothing protectionism, or his passionate defense of eminent domain, I think we can say that this is a Republican campaign that would have appalled Buckley, Goldwater, and Reagan.

Brent Bozell: Until he decided to run for the GOP nomination a few months ago, Trump had done none of these things, perhaps because he was too distracted publicly raising money for liberals such as the Clintons; championing Planned Parenthood, tax increases, and single-payer health coverage; and demonstrating his allegiance to the Democratic party.

Erick Erickson: In October 2011, when many of the other Republican candidates were fighting Barack Obama, Donald Trump told Sean Hannity, “I was [Obama’s] biggest cheerleader.” Trump donated to both the Clinton Foundation and Hillary Clinton’s Senate campaign, as well to Nancy Pelosi, Harry Reid, Chuck Schumer, and other Democrats. In 2011, according to the website OpenSecrets.org, “the largest recipient [of Donald Trump’s political spending] has been the Democratic Senatorial Campaign Committee with $116,000.”

Dana Loesch: I love conversion stories. I have my own, from when I became a conservative 15 years ago. But I’m not running for president. Donald Trump is. And his “conversion” raises serious questions. Trump wrote in his book The America We Deserve that he supported a ban on “assault weapons.” Not until last year did he apparently reverse his position. As recently as a couple of years ago, Trump favored the liberal use of eminent-domain laws.

David McIntosh: For decades, Trump has argued for big government. About health care he has said: “Everybody’s got to be covered” and “The government’s gonna pay for it.” He has called for boycotts of American companies he doesn’t like, told bureaucrats to use eminent domain to get him better deals on property he wanted to develop, and proudly proposed the largest tax increase in American history. Trump has also promised to use tariffs to punish companies that incur his disfavor. He offers grand plans for massive new spending but no serious proposals for spending cuts or entitlement reforms.

Whew! But will it do any good? Probably not. The kind of people who read National Review are already convinced that Trump is a menace. Trump’s fans, by contrast, are far more likely to have heard of Rush Limbaugh than William F. Buckley or Edmund Burke. And Rush thinks that Trump is great.

At the moment, everyone is eagerly awaiting “Trump’s reaction” to NR’s destruction derby. I sure hope they’ve never asked him for money in the past. In any case, I’m sure he’ll just write them off as establishment losers who are jealous of his success and afraid they won’t get invited to his inauguration. Still, at least the editors of National Review will always be able to say that their magazine has lasted a lot longer than the Trump magazine.

UPDATE: Oh goody! Trump, as usual, is already bored and tweeting out insults:

National Review is a failing publication that has lost it’s way. It’s circulation is way down w its influence being at an all time low. Sad!

Very few people read the National Review because it only knows how to criticize, but not how to lead.

The late, great, William F. Buckley would be ashamed of what had happened to his prize, the dying National Review!

Hmmm. Kinda weak tea. I give it a C-. And Trump used the apostrophe wrong twice in the first tweet. He must be tired. I guess the NR criticism hit him hard after all. And as long as we’re here, let’s do a fact check:

Is NR’s circulation “way down”? Their circulation normally goes up when a Democrat gets elected president and then slowly falls off. Their circulation today is down from its 2010 peak, but about the same as it was during the Bush administration. I rate this Mostly False.

Would William F. Buckley be ashamed of this issue—or of NR in general? Nope. I rate this Pants on Fire.

Does NR only know how to criticize, not lead? Yeah. It’s a magazine, after all. I rate this True. Still, people with glass keyboards should probably tread lightly on the CAPS LOCK key.