Former defense secretary Robert Gates has had a few uncomplimentary things to say about Hillary Clinton over the past couple of years, but they’ve mostly been fairly restrained. Not so much for 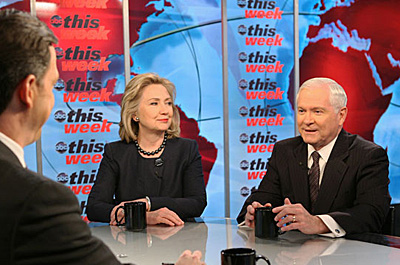 “The level of dialogue on national security issues would embarrass a middle schooler,” Gates said of the Republican contenders at a Politico Playbook event in Washington on Monday. “People are out there making threats and promises that are totally unrealistic, totally unattainable. Either they really believe what they’re saying or they’re cynical and opportunistic and, in a way, you hope it’s the latter, because God forbid they actually believe some of the things that they’re saying.”

….“In some cases, the things they’re saying they’re going to do are unconstitutional or merely against the law and others are, from a budgetary standpoint, inconceivable, and so it seems to be that the press has not hammered hard enough and been relentless in saying, ‘How the hell are you going to do that?’”

In fairness to the press, the candidates have flatly refused to provide any more detail about how they’d do any of the things they say they’re going to do. And the public doesn’t seem to care. So what are reporters supposed to do? In other remarks, Gates explained why he didn’t want photos of the Bin Laden raid released to the public:

The intelligence veteran of nearly 27 years also spoke about the danger of leaks and recalled the 2011 raid in Pakistan that killed terrorist Osama bin Laden. A friend later emailed him a Photoshopped version of the famous picture in the situation room with the occupants wearing superhero costumes: Obama as Superman, Joe Biden as Spider-Man, Clinton as Wonder Woman and Gates himself as the Green Lantern.

“And we all had a good laugh, and then I said, ‘Mr President, this is the reason the photographs of the dead Bin Laden must never be released, because somebody will Photoshop them and it will anger every Muslim in the world, even those that hated Bin Laden, because of being disrespectful of the dead, and it will create greater risk for our troops in Iraq and Afghanistan and for all Americans, especially in the Middle East.’ And to the best of my knowledge, those photographs are the only things about that raid that have never leaked.”