The 1994 crime bill has come in for a lot of attention lately, and even Bill and Hillary Clinton have said they now regret some of its provisions. But which ones?

But Republicans exacted a price for this. In particular, they wanted an expansion of the death penalty and several provisions that stiffened sentencing of felons. As it turns out, though, Republicans didn’t have a very good idea of what their own favorite policies would actually accomplish. Are you surprised? For example, here’s the death penalty: 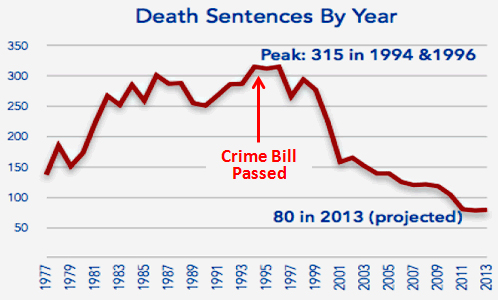 The crime bill created lots of new capital crimes, but its actual effect was nil. The death penalty was already losing support by 1994, and has been banned by an increasing number of states ever since. On the federal level, death sentences have always been a tiny fraction of the total (around four or five per year), and that didn’t change after 1994.

So what about sentencing? The crime bill did have an effect here, but it was generally pretty modest. Here are a couple of charts from an unpublished review of the law seven years after it passed: 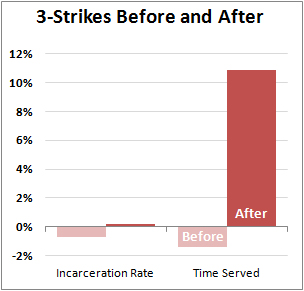 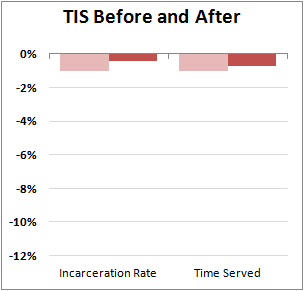 Why the small effect? In the case of 3-strikes, it simply didn’t affect very many people. It did increase average time served by several months, but that’s about it. And the much-loathed Truth-in-Sentencing provisions had even less effect. This is because more than half the states already had TIS requirements even before the 1994 bill passed, and not many passed new ones as a result of the law. It did push up the trend in incarceration and time served by a few tenths of a percentage point, but that had only a minuscule effect on overall incarceration rates.

The crime bill also included a few other witless measures, like reducing educational opportunities for inmates, and it unquestionably contributed to the crime hysteria that was prevalent at the time. Nonetheless, its most hated features never had a big effect.

Two years later Clinton also signed the Antiterrorism and Effective Death Penalty Act of 1996, which had some pretty objectionable changes to habeas corpus. This was arguably worse than anything in the 1994 bill, but it didn’t have a substantial overall effect on incarceration rates.