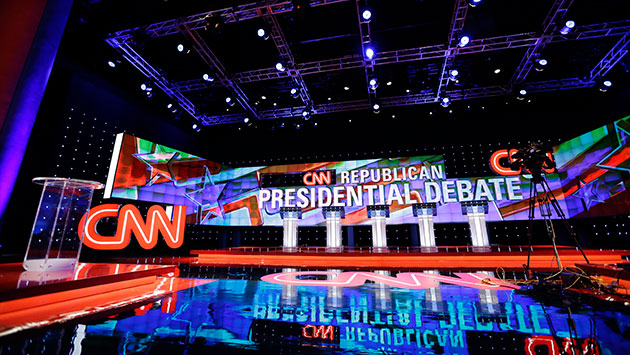 Well, that was bracing. Rubio and Cruz obviously both decided to take on Donald Trump at the same time, and they actually gave Trump some trouble. Aside from simply attacking him more than usual, they adopted the Trumpian tactic of interrupting at every opportunity so he had a hard time responding coherently. The downside is that it made the whole debate look a bit like kindergarten play time. The upside is that they finally got under Trump’s skin.

Trump ran into a couple of land mines tonight. Asked about his tax returns, he made up a feeble excuse about how he’s always being audited and that’s why he can’t release his returns. He could release them anyway, of course, and he can certainly release returns from a few years ago, since presumably those audits are done. He’s going to have to address that, though he can probably bluster his way past it long enough to get through Super Tuesday. In any case, Trump tried to make it look like he’s being persecuted by the IRS with all these audits, but Rubio and Cruz now have a really good attack line: If Trump is being audited, maybe there’s something fishy going on. Shouldn’t the public know about that?

The other land mine was on health care. Dana Bash joined Cruz and Rubio in pressing Trump on whether there was anything more to his health care plan than simply allowing insurance companies to compete across the entire country (in debatespeak, this was “getting rid of the lines”). Oddly enough, Trump allowed himself to get pressured into saying that this was literally his entire plan, which even for Trump strains the boundaries of idiocy. “Getting rid of the lines” might or might not be a good idea (it’s probably a good idea if it’s properly regulated), but its effect on health care costs would be quite modest. Beyond that, suggesting that 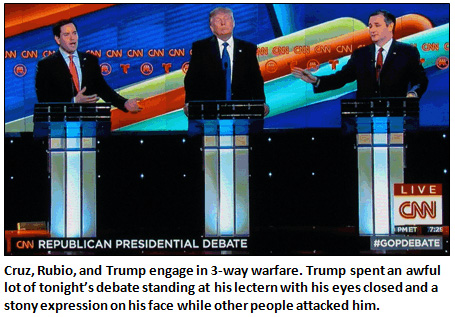 insurance companies would all be happy to insure people with pre-existing conditions if the lines were eliminated—well, I’m not sure what to say about that. It’s fantasy land.

Trump had a minor hiccup when he claimed that the US has the highest taxes in the world. He probably meant to say that we have the highest corporate rates—which is close to true if you look at statutory rates—but instead he insisted that this applied to everything: “We pay more business tax, we pay more personal tax. We have the highest taxes in the world.” That’s basically the opposite of the truth. But I suppose this is the kind of flub that never seems to hurt him.

A bigger flub was his preposterous claim that he didn’t support the Libya war. There’s clear and abundant evidence that he did and it’s all available on YouTube. These kinds of shameless lies never seem to hurt him, though. I’m not sure if this time will be any different.

Best line of the night: After Trump reminded everyone about Rubio’s repeat-o-matic meltdown a couple of weeks ago, Rubio produced the night’s best zinger: “I see him repeat himself every night, he says five things: everyone’s dumb, he’s gonna make America great again, we’re going to win, win win, he’s winning in the polls, and the lines around the state. Every night.” It’s funny because it’s true! And I’m not even sure if it was rehearsed.

Scorecard: I think Trump took some real hits tonight. He could start to lose a few points in the polls, especially if he spends the next week fending off questions about his tax returns and his $1 million fine and his health care plan. Rubio and Cruz both did well, but I give Rubio the edge. His attacks were a little sharper and the rest of his debate performance was a little better. Carson and Kasich were, of course, nonentities. Never has it been so obvious that no one cares about them anymore.

10:50 – Kasich says he has loads of experience. He wants people to “think about” giving him their vote.

10:44 – When are we going to get a question about general relativity?

10:39 – Kasich thinks President Obama should have brokered an agreement with Apple. You bet. That would have worked great.

10:36 – Rubio says the government isn’t asking Apple to create a backdoor for the iPhone. In fact, that’s exactly what they’re asking for. Rubio clearly has no idea what a backdoor is.

10:34 – Wolf has completely lost control of this debate. In fairness, I’m not sure anyone could do any better.

10:32 – Cruz does an extended riff on Trump being a liar. Trump responds with an attack on Cruz for his Iowa shenanigans.

10:25 – Donald Trump is not just criticizing the Libya war, he’s literally praising Qaddafi. He’s also claiming he didn’t support the Libya war, which is demonstrably a huge whopper. He was quite vigorous in his support.

10:21 – Carson whines about not getting called on. This is true, but it’s because no one cares about him anymore. Now that he finally gets some time, he complains that the IRS suddenly started auditing him after he began criticizing President Obama. The IRS is corrupt and it should be eliminated.

10:17 – Wolf asks about North Korea. Trump wanders off on the $21 trillion deficit. “We can’t afford to defend everyone.” Japan, Korea, Europe, they should all be paying us to defend them.

10:15 – The Rubio-Cruz-Trump fights have been great! The gloves are finally off, I guess. I wonder if it’s doing Trump any damage?

10:10 – Trump says he doesn’t want to take sides between Israel and the Palestinians. “But I’m totally pro-Israel.” Okey doke.

10:07 – Cruz asks again why Trump won’t release past tax returns. Trump: I’m being audited. Cruz: How many years? Trump: Four or five. (It was two or three ten minutes ago.) Unfortunately, Wolf goes to a commercial just as it gets good. Trump really has no excuse for not releasing returns from before the years he’s being audited. He blew it big time on this. He should never have used the audits as an excuse.

10:05 – Marian is distracted. She says the debate background looks like a hot dog.

10:03 – Cruz: The only reason Trump isn’t releasing past returns is because there’s something bad in them.

10:01 – Cruz says Trump needs to release his taxes because he’s being audited. Public needs to know if there’s some kind of fraud the government is investigating.

9:52 – Trump says we have the highest taxes in the world. Naturally Wolf doesn’t question this. Even for Trump, this is wildly removed from reality.

9:50 – Now Cruz going after Trump on health care too. Wolf wants to move on, but no one will let him.

9:43 – Hmmm. Rubio must have been practicing holding his ground against a loudmouth. He’s dishing pretty well against Trump.

9:41 – Bash asks Trump to talk more about his health care plan. He drones on some more about the lines. Bash: “Is there anything you’d like to add to that?” Trump: “No! There’s nothing to add. What’s to add?”

9:38 – Trump: Rubio doesn’t know about the lines. Rubio, sarcastically: That’s it? What’s your plan? Trump: You’ll have so many different plans. It’ll be beautiful.

9:36 – Bash: “Getting rid of state lines will solve all our health insurance problems?” Trump: You betcha.

9:35 – Trump says insurance companies are wrong when they say they need a mandate if they’re required to cover people with pre-existing conditions. Just another insurance company hustle.

9:29 – Rubio says Trump was pro-life until recently. He wouldn’t trust him to appoint judges who defend religious freedom.

9:27 – Trump now hares off on a spiel about Cruz attacking his sister. He wants an apology. Cruz isn’t buying.

9:25 – Trump goes off on a tangent about Ted Cruz supporting the appointment of John Roberts, who allowed Obamacare to stand. Cruz throws Roberts under a bus, saying he only supported him because he was the nominee of the party.

9:20 – Trump: Hispanics love him, Univision loves him. He’ll be the greatest president for Hispanics ever.

9:09 – Trump accuses Rubio of lying. Rubio accuses Trump of lying. Trump says it was 30 years ago. Rubio: “I guess there’s a statute of limitation on lies.”

9:06 – Rubio now asking people to google “Trump Polish workers.” I think they were Romanian workers, but whatever. Then some stuff about Trump going bankrupt and Trump University getting sued. Then Trump goes after Rubio for his mortgage. Then they just start shouting at each other. Update: I misheard. Trump got in trouble for hiring Polish workers 30 years ago. The Romanians are the ones he hires at Mar-a-Lago today. Trump sure does seem to love Eastern Europeans, doesn’t he?

9:03 – How is Trump going to get Mexico to pay for the wall? Trump doesn’t answer, of course. He starts ranting about the president of Mexico using a bad word on television.

8:56 – Trump is now just randomly insulting Cruz for not having any friends.

8:54 – Rubio doing his best to take on Trump over immigration: he hired illegal immigrants and paid a fine, he hired foreigners at Mar-a-Lago, etc. Seems to have drawn a little blood.

8:45 – Kasich, Rubio, and Cruz are having none of Carson-geddon. America is great, anyone can become president, etc.

8:42 – Ben Carson starts off apocalyptic: “America is heading off the abyss of destruction.” Um….

8:40 – Hey! The debate is starting already? I guess I screwed up. I thought 8:30 was for the pregame chitchat. But it looks like we’ll be starting up any second.