Back in 2005, South Dakota adopted a program called 24/7 Sobriety. It’s pretty simple: if you’re convicted of drunk driving, you have to take a breath test twice a day while you’re on pretrial release or probation. If you fail, you get tossed in jail for a couple of days.

So how has it worked out? According to a new study in Lancet Psychiatry, pretty well. Previous studies had already demonstrated a 12 percent drop in repeat drunk driving, and the new study shows that 24/7 also contributed to a drop of 4.3 percent in all-cause mortality. That’s a lot of lives saved. Mark Kleiman has more of the details here.

So far, none of this is a big surprise. But another result of the study is more interesting: the decline in mortality was largest among women even though men make 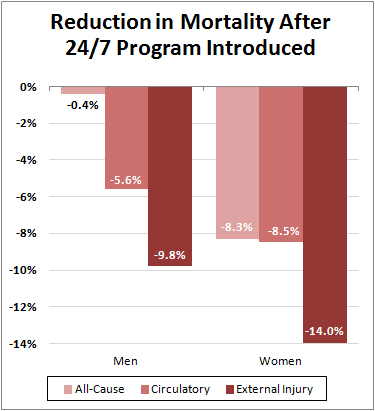 up the vast majority of drunk driving cases. The chart on the right shows the numbers. All-cause mortality barely budged for men but was down 8.3 percent among women. Even more startling, the decline in mortality was mostly due to fewer deaths from circulatory problems and external injuries.

But why? The authors make a few suggestions:

A well publicised programme such as 24/7 Sobriety…might promote a general deterrent effect. Another potential mechanism is a reduction in drinking-related problem behaviours among participants, which might reduce mortality among non-participants (eg, domestic violence).

With respect to circulatory deaths among women, one might consider reduced stress due to partner’s cessation of heavy drinking. There might also be spillovers due to changes in the drinking behaviour of participants’ family and friends. A husband’s drinking affects his wife’s drinking during the transition into married life and early in the marriage, and transitions in drinking behaviour can have spousal effects even later in life.

This is, obviously, speculative. Still, it confirms our intuition that heavy drinking affects friends and family as much or more than it does the heavy drinker himself. Heavy drinkers are far more likely to assault their wives and girlfriends; are more likely to trigger drinking in others; and just generally cause lots of stress and anxiety in those around them. When you cut out the heavy drinking, all of those things are reduced significantly. And the biggest beneficiaries are women.