Let’s turn now to a less contentious topic: gasoline lead and violent crime. As you know by now (yes, there will be a quiz), there are three fundamental types of evidence in favor of the lead-crime hypothesis:

All three of these suggest that lead poisoning in kids leads to more violent crime later in life. Today brings yet another bit of evidence. It’s an ecological study done at Macquarie University in Australia, which makes it especially interesting. Here’s the problem: As long as you do studies only of American crime, you can never know for sure if there’s some hidden variable that affected all American kids and just happened to spread at about the same rate as lead poisoning. Maybe eating lots of McDonalds hamburgers causes crime rates to soar for some reason. But you’ll never know because kids everywhere in the country ate more and more Mickey D’s during the 50s and 60s and there’s no data to tell you precisely who ate the most.

But if you study other countries, a lot of these confounding variables go away. Not all of them, perhaps, but most. If you think the problem is poverty or social welfare programs or policing styles or the unique American history of racism, then take a look at Canada. Or Italy. Or Australia. They have very different histories of all these things. If violent crime rates still match up with lead poisoning, that’s good evidence that lead poisoning is truly the causal agent.

Rick Nevin has already done some of this work, comparing crime rates to lead poisoning in a number of other countries. But it’s always better to get a detailed study from a local research team with access to more data. Interestingly, the Macquarie team didn’t look at blood lead levels in children. They had direct access to atmospheric levels of lead, which Australia has tracked for decades, and this allowed them to look specifically at the effect of just gasoline lead. They were also able to make comparisons at the neighborhood, state, and national levels. Here are their conclusions: 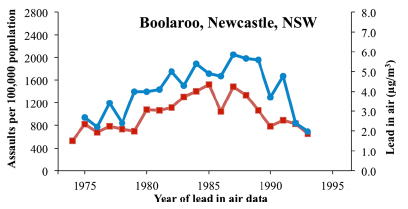 rates 18 years later, as the health and behavioral effects of lead emissions are dissipated at larger geographic scales.

The chart on the right is typical of the suburban neighborhood-level data. Boolaroo is about an hour north of Sydney and has a history of high lead levels thanks to a local smelter that operated for decades. As you can see, the correlation between atmospheric lead and violent crime (lagged by 21 years) is very strong. In other suburbs, where lead was produced by gasoline and overall levels were lower, the correlation isn’t quite as visually convincing, but it’s still quite strong.

So we have a different country; a different time frame; and a different criminal justice culture. Yet crime still follows the trajectory of lead emissions, which appears to explain about a third of the change in assault rates. That’s a lot. It’s one more bit of data to add to the already persuasive pile of evidence in favor of the lead-crime theory.