Dara Lind reports that young Latinos are torn between Bernie Sanders and Hillary Clinton. But not because of anything either candidate has said:

Instead, the president on their mind is Obama. They’re still wrestling with his failure to keep his campaign promise to pass immigration reform, and the record deportations of his first term.

….”My biggest fear,” says Jocelyn Sida of the civic engagement group Mi Familia Vota, “is that the mentality of Latinos is going to be all about broken promises, don’t trust any candidate or campaign.”…Sida’s reference to “broken promises” is right on. For many — especially for young Latinos, many of whom came of political age during the Obama administration — the outgoing president is associated with the promise he made, then broke, on immigration reform, as well as the deportations that took place in its stead.

There are lots of obvious things to say before I comment about this. I’m not young. I’m not Latino. I’m not idealistic. And I’m a pretty big fan of Obama. So I have my own biases.

And yet…there’s still something dispiriting about this. Did Obama break his promise to introduce comprehensive immigration reform in his first year? Yes indeed. He says it was because the economy had collapsed and he had to spend all his time dealing with that. But no one really buys that. The stimulus bill passed pretty quickly, and during the rest of his first year Obama found time to deal with health care, Afghanistan, General Motors, climate change, touring the Middle East, and plenty of other things. Was he really so busy that he couldn’t spend some time on immigration reform?

The answer is that Obama is skirting the truth here—but, oddly for a politician, not in a way designed to make him look better. The real truth is that during an epic unemployment crisis he had no chance of getting the votes to pass 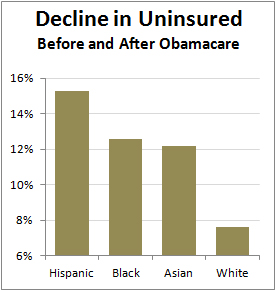 immigration reform. So like any president, he triaged. He spent his time on other things in hopes that he could make a successful run at immigration reform a little later. Was this the right call? We’ll never know, but it sure strikes me as correct.

In the end, of course, disaster struck: Democrats lost their House majority in 2010, and even with a strong enforcement record (all those deportations) and Republican support, immigration reform could no longer pass. But this is hardly the end of the story. Obama signed the mini-DREAM executive order in 2012. He worked hard to pass comprehensive reform in 2013. He signed another historic executive order in 2014 aimed at immigrant adults. And although this is seldom given much attention, the biggest beneficiaries of Obamacare have been Hispanics.

So did Obama break his promise? Yes. Should young Latinos be demanding that the next president make immigration reform a priority? Yes. That’s how you get things done.

But should they feel betrayed by Obama? I don’t think so. The nutshell version is this: Every president has to decide which of his priorities can pass Congress. If Obama had tried to push immigration reform in 2009, it almost certainly wouldn’t have passed, no matter how hard he had pushed. That’s the fault of reality, not presidential willpower. So, as Obama so often does, he waited. He waited for the economy to improve, and in the meantime he tried to set the stage for success with a strong enforcement record—even at the expense of losing political support from an important voting bloc. When the time came, he worked with Republicans and came close to passing something. But the House balked and it failed.

None of this would have changed if Obama had barreled ahead in his first year. He would have lost just as badly, but two other things would also have happened. First, some of his other first-year initiatives would likely have fallen by the wayside. Second, he would have had a big, symbolic losing fight to his name. That would have done him a world of good in the Hispanic community, but he wasn’t willing to go down that cynical path.

I’m not young. I’m not Latino. I’m not idealistic. But I don’t consider it a betrayal to have a president who shows me the respect of foregoing the cheap and cynical political stunt in favor of a longer, tougher, but more realistic chance of getting something actually done.