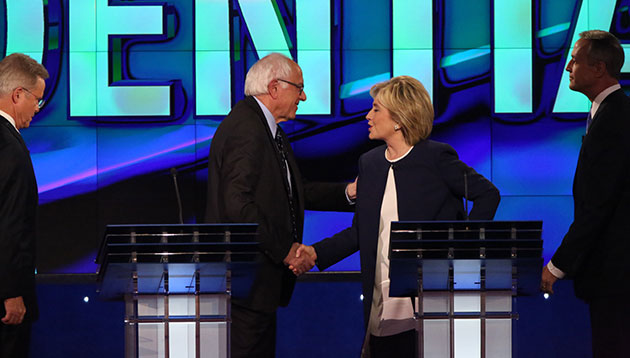 As debates go, this one was pretty good. The moderators generally did a good job, allowing the candidates to argue when it made sense, but ending things when it looked like there was nothing useful left to say. This is a lot easier with two people than ten, of course, and also easier when both candidates are relatively civil.

Hillary was more aggressive than I’ve seen her before. Her complaint early on that Bernie was slandering her with innuendo and insinuation (and “artful smears”) was tough but, I think, also fair. And I have a feeling Bernie felt a little embarrassed by it. He was certainly careful to pull things back to a civil tone after that. Hillary is not a natural campaigner, but she’s a good debater, and this was Hillary at her pugnacious best.

Obviously foreign affairs are not Bernie’s strong point, but I was still a little surprised at just how poorly prepared he was to say much of anything or to draw much of a contrast with Hillary’s views. Either he really doesn’t know much, or else he thinks his dovish views are losers even 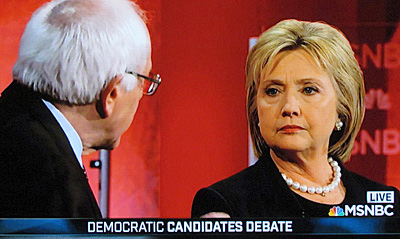 among the Democratic base. I won’t pretend that Hillary was a genius on this stuff—almost nobody is on a debate stage—but at least she sounded well briefed and confident.

On financial issues, Bernie was surprisingly weak. This really is his strong point, but he continues to have a hard time getting much beyond platitudes. I get that it’s a debate and 90 seconds isn’t much, but it’s still enough time for a little more detail than “the system is rigged.” Hillary didn’t do much better, but she held her own and gave a strong response to the two (!) questions about her Goldman Sachs speeches.

Overall, I doubt this debate changed many minds. Bernie insisted that we can dream. Hillary insisted that we figure out what’s doable. I’d score it a clear win for Hillary based on her aggressiveness and generally solid answers compared to Bernie’s platitudes and obvious reluctance to attack hard. But I admit this might just be my own biases talking, since Hillary’s approach to politics is closer to mine than Bernie’s.

10:58 – But Bernie will happily get suckered! It’s campaign finance reform for him.

10:55 – Hillary isn’t going to be suckered into setting a top priority, thus throwing all the others under the bus. Come on, Chuck.

10:44 – Regarding Flint, I will not be happy until either Hillary or Bernie mentions that we now know lead poisoning leads to higher crime rates, “as brilliantly set out in an article by Kevin Drum a couple of years ago.” I will vote for whoever says this first.

10:42 – Bernie on the death penalty: In a violent world, “government should not be part of the killing.” I have to admit I’ve never really understood this particular bit of reasoning.

10:31 – Ah. Hillary now gets to use Colin Powell as backup for her email problems.

10:29 – Hillary is thrilled about all the young people supporting Bernie. OK then.

10:12 – I hate to say this, but Bernie on North Korea sounds about as well briefed as Donald Trump. Very strange situation. Handful of dictators—or, um, maybe just one. Gotta put pressure on China. “I worry very much about an isolated, paranoid country with atomic bombs.”

10:10 – Bernie does himself no favors on national security. I’m closer to his position than Hillary’s, but Bernie honestly sounds like he’s never given this stuff a moment’s thought. At least Hillary has some views and sounds confident in her abilities.

10:08 – Bernie wagging his finger again. I’m pretty sure the hosts will call on him regardless.

10:06 – Bernie really needs to have a foreign policy other than “I voted against the Iraq War.”

10:05 – Why is there bipartisan loathing of being “the policeman of the world”? What does this even mean?

10:03 – Hillary: we have a very cooperative government in Afghanistan. You bet. Wildly incompetent and corrupt, but pliable.

10:01 – Everyone agrees that a Muslim civil war is the right way to handle the Middle East.

9:58 – Hillary provides Shermanesque answer about not sending ground troops to Iraq or Syria.

9:42 – I’m with Hillary on reinstating Glass-Steagall. To me, it’s the Democratic equivalent of raising the retirement age to save Social Security: easy to understand, but not the best answer by a long way.

9:41 – Hillary defends her Goldman Sachs speeches competently, but Bernie doesn’t really fight back. He just provides a generic answer about the pernicious power of Wall Street.

9:31 – Hillary is attacking very hard tonight. Bernie voted to deregulate derivatives! Not that there’s anything wrong with that. You think she’s played this game before? Bernie responds by telling people to look up a YouTube.

9:29 – Bernie answers with generic criticism of special interests and money in politics. Not a strong response.

9:27 – Hillary criticizes Bernie for claiming to run a positive campaign, but constantly attacking her “by innuendo, by insinuation.” Then she asks him to stop the “artful smear” he’s been carrying out against her. This is a tough hit on Bernie.

9:23 – I think Hillary missed a chance to say that of course Bernie is a Democrat and he shouldn’t have to defend himself on that score. It would have been a nice moment for her with no downside.

9:19 – Hillary refers to Bernie as “self-appointed gatekeeper” of who’s a progressive. Ouch.

9:15 – Bernie: none of his ideas are radical. True enough, by non-American standards.

9:14 – Good answer from Hillary on whether she’s progressive enough: Under Bernie’s standards, no one in the party is truly progressive.

9:01 – I see that Rachel Maddow is as excited as I am that Martin O’Malley has dropped out.

8:58 – This is the second election cycle in which I’ve liked both of the Democratic frontrunners. In 2008 I ended up leaning for Obama, which I don’t regret. This year I’m leaning toward Hillary. Both times, however, I’ve been surprised at how fast things turned ugly. But ugly they’ve turned.