I know this is just spitting into the wind, but you really have to read Donald Trump’s interview with the Washington Post editorial board to believe it. Here’s one little excerpt about Iraq, American troops, and oil:

DIEHL: And could I ask you about ISIS, speaking of making commitments, because you talked recently about possibly sending 20 or 30,000 troops and—

TRUMP: No I didn’t, oh no no no, okay, I know what you’re saying….I didn’t say send 20,000. I said, well the generals are saying you’d need because they, what would it take to wipe out ISIS, I said pretty much exactly this, I said the generals, the military is saying you would need 20- to 30,000 troops, but I didn’t say that I would send them.

DIEHL: If they said that, would you go along with that and send the troops?

TRUMP: I find it hard to go along with—I mention that as an example because it’s so much….We should have never been in Iraq. It…was one of the worst decisions ever made in the history of our country. We then got out badly, then after we got out, I said, “Keep the oil. If we don’t keep it Iran’s going to get it.” And it turns out Iran and ISIS basically— 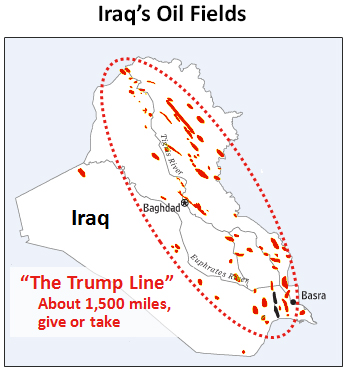 HIATT: How do you keep it without troops, how do you defend the oil?

TRUMP: You would… You would, well for that— for that, I would circle it. I would defend those areas.

TRUMP: Yeah, I would defend the areas with the oil.

Trump seems to be under the impression that Iraq’s oil is in a region about the size of Central Park that he could just surround and protect. The map on the right—which has been printed in magazines and newspapers thousands of times over the past decade—shows where the oil really is: everywhere. Trump would need a Maginot Line about 1,500 miles long to “circle it.”

I’m no military man, but I’m pretty sure a front 1,500 miles long would require a little more than 20,000 troops. Maybe Trump is planning to build a wall instead.

BY THE WAY: This isn’t even the best part of the interview. I just chose it sort of at random. You can dive in pretty much anywhere and get stuff just as good. Trump’s extended riff on his hands is a good place to start.