Last night’s debate sure illustrated Hillary Clinton’s big problem running against a guy like Bernie Sanders. Here’s Jorge Ramos—who’s obviously obsessed with his reputation for asking “tough” questions—badgering her about the 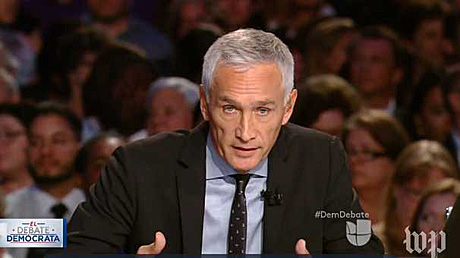 deportation of children and immigrants without criminal records:

RAMOS: Secretary Clinton, the last time we talked in January, in Iowa, I asked you if you could be the next deporting chief. And you told me, no, that you wouldn’t be the next deporter-in-chief. However, you refused two times to say you would not deport children…Can you promise that you won’t deport immigrants who don’t have a criminal record?

RAMOS: But will you deport children?

RAMOS: Could I get a yes or no answer?

RAMOS: But again, yes or no, can you promise tonight that you won’t deport children, children who are already here?

CLINTON: I will not deport children…

RAMOS: Okay. So I want to be very specific. So you are telling us tonight that if you become president you won’t deport children who are already here?

CLINTON: I will not.

RAMOS: And that you won’t deport immigrants who don’t have a criminal record?

CLINTON: That’s what I’m telling you…

RAMOS: So you will stop those deportations?

It’s pretty obvious that Hillary is doing her best to tap dance around this. If you were watching, you could almost hear the gears grinding in her head. She desperately doesn’t want to give a yes-or-no answer—probably because she knows perfectly well that this isn’t a yes-or-no question—but it’s obvious Ramos isn’t going to give up. So she’s making calculations in real time about whether she can afford to provide an ambiguous answer in front of a Latino crowd on national TV, or if she should just cave in and make a Shermanesque statement.

Part of this calculation, of course, is that Bernie Sanders is standing right next to her, and she knows that Bernie will have no trouble with a Shermanesque statement. He thrives on them. And that will appeal to Latino voters. Grind, grind, grind. So eventually she gives in and flatly promises never to deport anyone without a criminal record.

Which, as we all know, is almost certainly an impossible promise to keep. And Hillary hates that. She knows what the legal and political realities are, and she hates having to pretend they don’t exist. But this year, we’re running an election where reality doesn’t matter. A big chunk of both Democratic and Republicans voters flatly don’t care if policies are realistic. They just want to know what a candidate feels.

This is what I meant last night when I said Hillary tends to be honest to a fault when discussing policy. It’s ironic, given her reputation. In this case, I doubt that she wants to deport children. Her intentions are every bit as good as Bernie’s. But she can’t stand to pretend that that’s all there is to it. Unfortunately, this is not the year for policy honesty. If Hillary wins, it will be in spite of her honesty, not because of it.