Here’s what’s in the New York Times Magazine this week:

How Hillary Clinton Became a Hawk 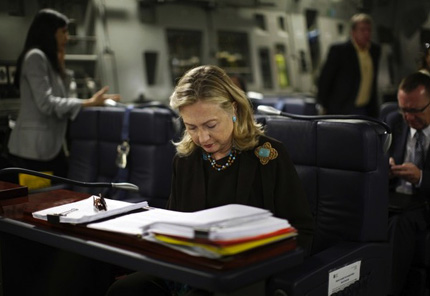 is so hawkish, Mark Landler makes it very, very clear that she is, indeed, a very sincere hawk:

Clinton’s foreign-policy instincts are bred in the bone — grounded in cold realism about human nature and what one aide calls “a textbook view of American exceptionalism.” It set her apart from her rival-turned-boss, Barack Obama, who avoided military entanglements and tried to reconcile Americans to a world in which the United States was no longer the undisputed hegemon. And it will likely set her apart from the Republican candidate she meets in the general election. For all their bluster about bombing the Islamic State into oblivion, neither Donald J. Trump nor Senator Ted Cruz of Texas have demonstrated anywhere near the appetite for military engagement abroad that Clinton has.

For all intents and purposes, Landler says that Hillary has been the most hawkish person in the room in almost literally every case where she was in the room in the first place. For example:

Adm. Robert Willard, then the Pacific commander, wanted to send the carrier on a more aggressive course, into the Yellow Sea….Clinton strongly seconded it. “We’ve got to run it up the gut!” she had said to her aides a few days earlier.

….After 9/11, Clinton saw Armed Services as better preparation for her future. For a politician looking to hone hard-power credentials — a woman who aspired to be commander in chief — it was the perfect training ground. She dug in like a grunt at boot camp.

….Jack Keane is one of the intellectual architects of the Iraq surge; he is also perhaps the greatest single influence on the way Hillary Clinton thinks about military issues….Keane is the resident hawk on Fox News, where he appears regularly to call for the United States to use greater military force in Iraq, Syria and Afghanistan….The two would meet many times over the next decade, discussing the wars in Afghanistan and Iraq, the Iranian nu­clear threat and other flash points in the Middle East.

….Keane, like Clinton, favored more robust intervention in Syria than Obama did….He advocated imposing a no-fly zone over parts of Syria that would neutralize the air power of the Syrian president, Bashar al-Assad, with a goal of forcing him into a political settlement with opposition groups. Six months later, Clinton publicly adopted this position, further distancing herself from Obama.

….The Afghan troop debate….Her unstinting support of General McChrystal’s maximalist recommendation made it harder for Obama to choose a lesser option….“Hillary was adamant in her support for what Stan asked for,” Gates says….“She was, in a way, tougher on the numbers in the surge than I was.”

And Landler doesn’t even mention Libya, perhaps because the Times already investigated her role at length a couple of months ago. It’s hardly necessary, though. Taken as a whole, this is a portrait of a would-be president who (a) fundamentally believes in displays of force, (b) is eager to give the military everything they ask for, and (c) doesn’t believe that military intervention is a last resort, no matter what she might say in public.

If anything worries me about Hillary Clinton, this is it. It’s not so much that she’s more hawkish than me, it’s the fact that events of the past 15 years don’t seem to have affected her views at all. How is that possible? And yet, our failures in Iraq, Afghanistan, Libya, Yemen, Syria and elsewhere apparently haven’t given her the slightest pause about the effectiveness of military force in the Middle East. Quite the opposite: the sense I get from Landler’s piece is that she continues to think all of these engagements would have turned out better if only we’d used more military power. I find it hard to understand how an intelligent, well-briefed person could continue to believe this, and that in turn makes me wonder just exactly what motivates Hillary’s worldview.