Elizabeth Warren gave a speech today that was focused on what sorts of workplace protections we should adopt in response to the rise of “1099 workers” (freelancers) and on-demand “gig economy” workers (Uber drivers). Before I get to that, though, a quick note: it’s not clear to me that there’s actually been much of a rise in gig workers, as you can see in the chart on the right. The percentage of 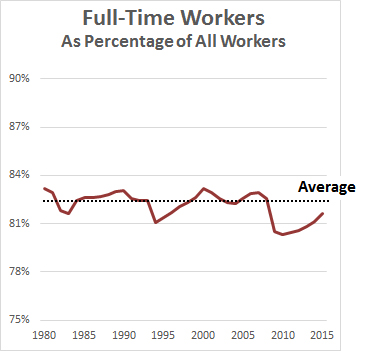 full-time workers normally decreases during recessions and increases during recoveries, which is exactly what’s happening right now. We’re still about a percentage point away from our pre-recession average, but we’ll probably make that up within a couple of years.

Still, we might not get there. What’s more, whether the number of part-timers is increasing or not, they deserve access to standard employment benefits. Warren names a few, and suggests that both health care and retirement benefits should be portable: they need to belong to employees, not to employers, and should stick with them regardless of who they’re working for. I was especially interested in her remarks on retirement benefits:

One change would make a big difference: a high-quality retirement plan for independent contractors, self-employed workers, and other workers who have no access to retirement benefits to supplement their Social Security.

This plan should use best-in-class practices when it comes to asset allocation, governance structure, and fee transparency. It should be operated solely in the interest of workers and retirees, and they should have a voice in how the plan is run. Instead of an employer-sponsored 401(k), this plan could be run by a union or other organization that could contract investment management to the private sector—just as companies like General Motors contract with providers like Fidelity to offer 401(k)s in the employment setting. And, because of the amazing advances in online investment platforms and electronic payroll systems, individuals could set up automatic contributions. It’s time for all workers to have access to the same low-cost, well-protected retirement products that some employers and unions provide today.

Defined-contribution programs like 401(k)s tend to get demonized by liberals, but they shouldn’t be. As Warren says, if you want a pension plan to supplement Social Security, it needs to be portable. Old-style pensions tended to lock people into jobs because they took a long time to vest and the vesting was backloaded. If you switched jobs every five or ten years, they likely provided you with a pretty paltry retirement income. By contrast, 401(k)s start building as soon as you start contributing, and continue building regardless of how often you change jobs. And while it’s true that the Great Recession wasn’t kind to 401(k) plans, they’ve mostly recovered since their losses in 2009-10.

Still, they’re far from perfect. One problem, as Warren notes, is that employees don’t always have good options about how to invest their 401(k) contributions—though that’s slowly getting better thanks to changes in the law passed a decade ago. Another problem is that too few people sign up for their 401(k) plans, and that’s improving too thanks to the legalization of “nudge” style opt-out plans. This has especially benefited low-income workers, who need retirement help the most.

But we can still do better. We can set up better programs for freelancers, and we can mandate the best-in-class investment practices that Warren mentions: automatic increases in contribution amounts as workers age, as well as low-fee lifecycle funds that become less risky as retirement approaches. This should be done universally, not just for freelancers. These are modest proposals, but they’d go a long way toward making modern pension plans truly safe, reliable, and universal.